For Windows OS, data protection becomes critical because computer failure may cause data loss. But how to backup and restore Windows easily? Wbadmin command lines will help you.

NTBackup is used as an embedded backup tool in Windows 2000, Windows XP, and Windows Server 2003. Among some versions, users can use the NTBackup.exe to control the backup process. But in Windows 2008, Wbadmin command line replaces the NTBackup.exe to run backup and recovery operations. Wbadmin command is also available in Windows Server 2008 R2/2012(R2)/2016/2019, Windows Vista and Windows 7/8/10.

The Wbadmin is a command-line utility with the following features:

Then, how to realize backup and recovery using Wbadmin commands? Please move on to the next part.

How to Use Wbadmin Command Lines to Backup and Restore Windows

● wbadmin enable backup: set and enable a scheduled backup with Wbadmin.
● wbadmin start backup: it refers to one-time backup.
● wbadmin stop job: it stops the running backup or recovery operation.
● wbadmin get versions: list some detailed information of backup that can be restored from the local computer. If you want to restore from another computer, please specify another location.
● wbadmin get items: list the items that a backup contains.
● wbadmin start recovery: restore files, folders, volumes and applications. Supported only in a Windows Recovery Environment (Windows RE).
● wbadmin start systemstatebackup: run a system state backup. It only applies to Windows Server systems.

Wbadmin commands may differ in different Windows versions. How do you know the particular commands in various versions? Just search “cmd” from the Start menu or taskbar, input “wbadmin /?” in a command window and then you can see what Wbadmin commands are supported.

2. Type wbadmin start systemstatebackup -backupTarget:F: and press Enter to create a system image and store it on volume F.

3. Type y and press Enter to confirm that you want to start the backup operation. 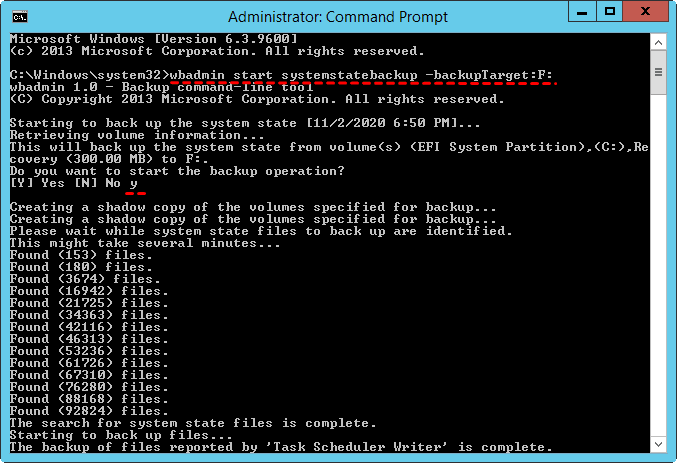 4. Wait until you see “The backup operation successfully completed”. Type exit and press Enter to close the Command Prompt window.

Tip: As mentioned above, wbadmin start systemstatebackup only applies to Windows Server systems. To backup system state in Windows 11/10/8/7, you can run the command wbadmin start backup -backupTarget:F: -allCritical to backup all critical volumes that contain operating system's state.

Tip: If you don’t know which backup version to be used, please run wbadmin get versions to check. 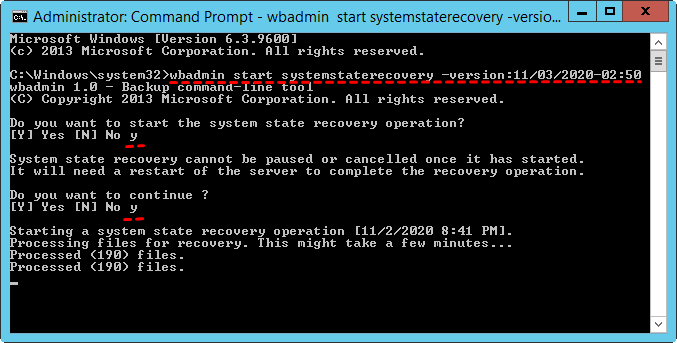 4. After the recovery process is done, type y and press Enter to restart the computer immediately.

5. After the computer restarts, log in with administrator account. There will be a pop-up window showing you the system state recovery operation has successfully completed. Press Enter to continue. 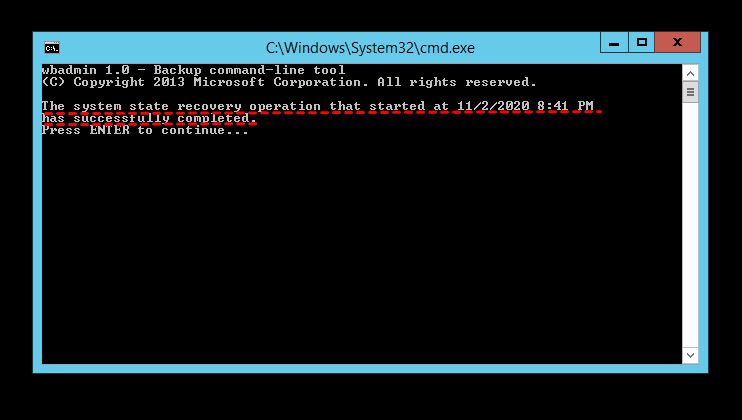 Now you know how to backup and restore via Wbadmin commands. However, Wbadmin commands randomly fail, and you may receive an error message like “The backup operation of the volume did not start”, “Failed to format media”, etc.

Luckily, the best server backup software - AOMEI Backupper Server can help you out under those conditions.

Just download AOMEI Backupper to have a try. After launching it, you’ll see a user-friendly interface. To create a system state backup, click Backup > System Backup. With a backup image at hand, you can restore your system and data anytime you need.

In a word, Wbadmin command lines can help users to backup and restore files, folders, system state and applications by writing some commands. However, the way is a little troublesome and difficult for common users if they are not familiar with specific parameters.

To ensure that the backup and recovery run smoothly, using professional software like AOMEI Backupper Server to finish the operations is a good idea. With the concise interface, all you need to do are a few clicks. If you want more advanced server backup strategy, AOMEI Centralized Backupper is recommended.