How to Do a System Restore When the Computer Won't Boot?

In Windows 10, you may encounter “Computer won’t boot when using system restore point” issue after updating, and receive an error message, saying “the computer experiences a Stop error (0xc000021a)”. At the same time, your computer will not go to the Windows desktop after restarting.

Why computer won’t boot in Windows 10? According to Microsoft, this is a known issue and its reason is the driver version of current computer does not match with the restored catalog file. And I’ll explain it in details later.

During the system restore process, Windows will temporarily stage the restoration of files in use, then save it in the registry and restore the catalog file and driver .sys file after restarting your computer. However, Windows will load the existing drivers before restoring later version of drivers. At last, the restart process will stop, because the driver version and the restored catalog file does not match.

How to do a system restore when the computer won’t boot?

How to do system restore from boot? You can try to disable driver signature enforcement if your computer won’t boot, and then the interrupted restoration will continue.

Now, see below and learn the detailed steps to do system restore from startup:

1. Go to Windows Recovery Environment. You can restart your computer twice or use a hardware restart. 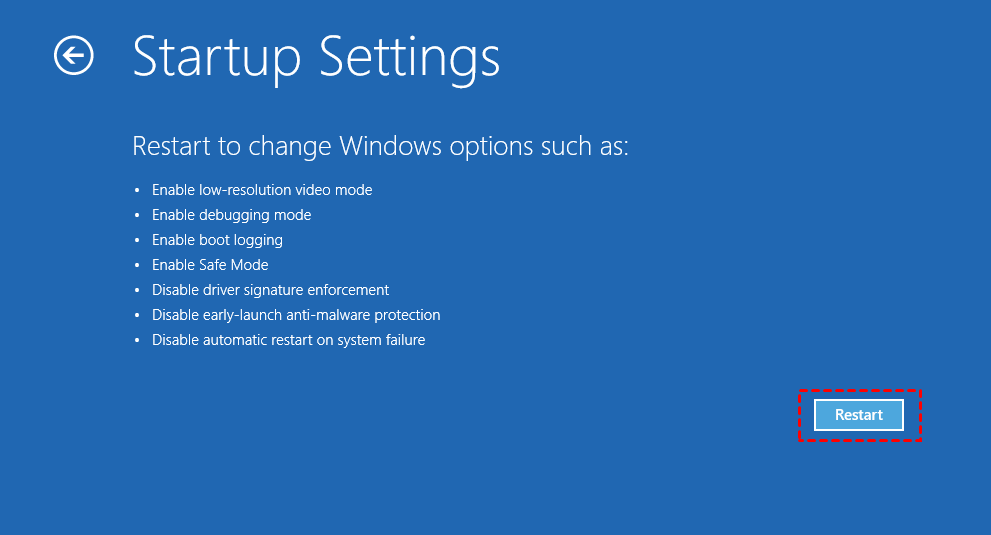 3. Then, you will see a list of startup settings, choose “Disable driver signature enforcement” by pressing F7 or number key 7.

4. Wait until the startup process ends. And during the restart process, Windows will continue to perform the interrupted restoration.

What if your computer still won’t boot?

If your computer still won’t boot after failed restart recovery, you could consider using a system image to restore system. And it does not cause any problem.

To be able to perform system image restore, you must create at least one system image backup that is accessible to the computer to be restored. If you cannot even boot your computer into recovery environment, you can create a recovery drive on the computer with same hardware, or directly use Windows installation DVD.

Note that you cannot mix the Windows versions, namely you can only use Windows 7/8/8.1/10 disc for restoring the corresponding version of Windows system.

How to fix a computer with system image recovery?

A system image restore will restore everything in the backup, and you cannot select or exclude individual files to restore. If you want an easier way to do system restore when the computer won’t boot, please go to the second.

To perform system image restore, use following the steps:

1. Connect the prepared USB drive or CD/DVD and device contain system image. Press a specific key (eg: ESC, F2, etc) to set your computer to boot from the removable device.

2. Windows will load required files from the drive or disc. Then the “Install Windows” screen appears, and you can click ”Repair your computer” to go into recovery options.

5. Click Next to restore computer with the latest system image backup. If you want to restore an older version of backup, click “Select a system image” and then click Next. Under the next screen, you can also select a backup from share folder over network by clicking Advanced option.

6. Choose whether to format the hard drive or not based on your needs. Then click Next.

7. The next screen will show a summary of this restoring operation. Click Finish to start the system image restore process.

Normally, restoring a system image backup takes a long time. Sometimes, it even fails with an error message. For better performance and convenience, you can use free AOMEI Backupper Standard.

How to restore system with AOMEI Backupper?

AOMEI Backupper Standard is a free but professional software, which allows you to restore system when the computer won’t boot with a backup image. And you can use either AOMEI PXE tool, or AOMEI Backupper bootable media, which is able to boot Windows 10/8.1/8/7.

To restore system when computer won’t boot, use the following steps:

2. Under the "Restore" tab, click "Select Image File" to locate the image backup file that you want to restore. Then click "Next".

3. Select to restore the entire backup and click Next. If needed, tick the option "Restore system to other location".

4. In this screen, you can preview the summary of restoring operation, and then click "Start Restore" to start the process.

Tip: If you want to restore system with dissimilar hardware, you can enjoy “Universal Restore” feature in AOMEI Backupper Professional or other advanced version.

System Restore can help you restore your computer to an earlier date. But what if the computer fails to start? In this case, you can use a bootable media or PXE boot tool to start your computer, then restore system with system image backup or disk image backup.

By default, there are two alternative ways to do a system restore when the computer won’t boot. One is to use system image backup created by built-in tool and restore with System Image Recovery, the other is to use third-party tool. However, the built-in restore tool is cumbersome and unreliable. If you do not mind using third party software, there is no need to bear it.

You May Also Like
How to Run System Restore from Boot in Windows 10/8/7?
Computer Won't Start after Windows Update | 5 Quick Fixes
How to Backup Files If Windows Doesn't Boot? - AOMEI Backupper
Windows 10 System Restore Stuck on Initializing or Restoring Files