AOMEI Backupper Standard is the best free Norton Ghost alternative, with it, you can ghost hard drive easily in Windows 10 or 11 or from a boot device.

Symantec Norton Ghost (disk utility) is a powerful disk backup and cloning software running in Windows XP (SP2 or later), Vista, and 7 for home and small business users, which has been discontinued on April 30th, 2013, and the support for Norton Ghost ended on June 30th, 2014.

The lasted version is Norton Ghost 15 and its key features like backup and recovery have been built into other Norton products such as the new Norton 360 or Symantec Ghost Solution Suite. 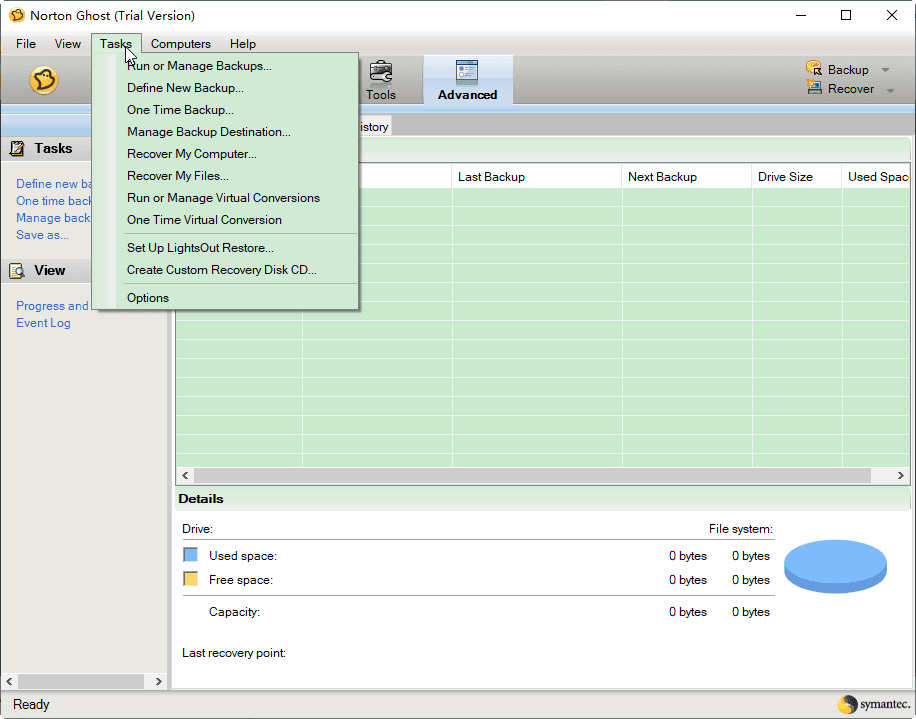 What does Norton Ghost 15 (no free version) do in Windows XP, Vista, and 7? The following are the main features provided by Norton Ghost:

However, Norton Ghost is not available for users, even not to mention available in Windows 8, 8.1, 10, and 11. And many users complained that Norton Ghost 15 backup is very slow. Moreover, you have to pay for Norton Ghost before doing anything. Hence, if you would like to protect your critical data and hard disk safely, it’s time to find another best free Norton Ghost alternative.

What Is the Best Norton Ghost Alternative?

Considering these powerful features in Norton Ghost, it’s strongly recommended to try the best Norton Ghost alternative - AOMEI Backupper Standard. And it has the following advantages:

And the most important thing is that it’s freeware for you to manage data.

How to Use Norton Ghost Alternative in Windows 10

To get clear on how to use this Norton Ghost alternative in Windows 10, we will show you the detailed steps of cloning system disk in Windows 10.

2. Choose Windows 10 system disk as the source disk to clone, and hit Next >>.

3. Tap another larger HDD or SSD as the destination disk to save all the files from Windows 10 hard disk, and press Next >> button to go on.

☪Tips:
✍The destination disk will be deleted or overwritten after the clone is finished.
✍You are able to clone larger hard drive to smaller as long as the data capacity on the source disk is smaller than the destination disk.

☪Tips:
✍SSD Alignment: Check this option if the destination disk is a solid-state drive (SSD) to optimize for your SSD.
✍Sector by sector clone: clone all the sectors on the source disk whether it is used or not, even bad sectors.
✍Edit partitions: It’s a premium feature to adjust partitions on the destination disk while cloning a smaller drive to a larger drive. And it still supports cloning MBR to GPT and converting disk types, and vice versa.

After the cloning is finished, replace the hard drive with the larger one safely and change boot order to boot from the cloned drive, or keep it safe as an alternative backup.

However, sometimes, you may encounter the cloned SSD won’t boot or Winload.efi missing after clone, please check if the boot mode (Legacy BIOS for MBR and UEFI for GPT) is correct first. If it is still not working, try the following two methods.

#2: Use the bootrec command to fix MBR and rebuild BCD.

As the best free Norton Ghost alternative - AOMEI Backupper Standard, it integrates backup, restore, sync, clone, and powerful tools. Thanks to its user-friendly GUI, all users can do these operations easily in just a few clicks.