What is data migration?

Data migration is to clone data from one disk to another one. It is very useful for people who want to migrate their data. But why would people like to migrate data to another disk? With time goes by, the usage of computer will become more and more, and you will find that one day, it will run out of disk space, so that you cannot store the new data. Thus, to migrate data to a larger disk is very effective to get more free space.

Besides, many users know that Samsung SSD (solid state drive) has an excellent performance, while the HDD (hard disk drive) has more disadvantages. For example, it has slower running speed, and it makes noise while it working, etc. So, many users want to migrate OS from the HDD to an SSD to get a better performance. 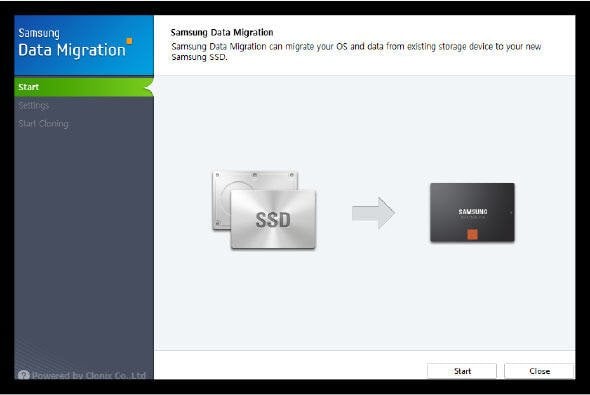 1. It will scan your system current condition with a simple graphic.

2. It will recommend you a plan of how to migrate data to SSD. Here you can add the additional partition which you want to migrate, and you can adjust the partition sizes as you want.

3. The data migration will be executed, and you will move all the data to another SSD.

"I used Samsung Data Migration and it seemed to work. Then it booted but after logon, went into a blue screen of semi consciousness with Windows preparing or something similar, and finally to a screen where mouse works but nothing else does and it's a black screen."

What’s wrong with the operations? Maybe the bootable files have been damaged or other reasons caused the migration failed. Fortunately, there is a way to solve the problem of Samsung Data Migration cloning failed.

AOMEI Backupper is a great powerful software which can migrate data to SSD in free without losing any data. It adjusts to almost all the Windows PC users including Windows 7/8/10. AOMEI Backupper Standard is the best free alternative to Samsung Data Migration. Using it to migrate data to SSD is very simple and easy. Before you do, there are something you need to know:

Step 1. To migrate data to SSD, you need to download the free edition of AOMEI Backupper. Install and launch it. Then click Clone -> Disk Clone (here you can choose what you need).

Step 2. Choose a disk that you want to migrate the data on it as the source disk.

Step 3. Choose the disk that you prepared before to take it as the destination disk. Click Next.

Step 4. You will move to the Operation Summary page. Here you can confirm the information about your operation. If you are migrating data to an SSD, we highly recommend you check SSD Alignment, because it would optimize for your SSD after cloning. Click Start Clone, and the progress will be launched.

Besides, if you are using AOMEI Backupper Professional edition, you can "manually adjust partition size" or "Add unused space to all partitions" by choosing the option under Edit Partitions.

Please note that cloning system disk between MBR and GPT disks is not supported by the Standard edition.

Step 5. Wait till the progress end, click Finish to exit.

AOMEI Backupper is a good data migration software. It can migrate the whole data on your disk, or it can only migrate OS to SSD. It is the best alternative to Samsung Data Migration. Besides, you can use it to backup and restore system, create bootable media, synchronize files between two computers, automatic backup files and so on.