Easiest Way to Backup Buffalo LinkStation NAS to another NAS

This tutorial will show you how to backup Buffalo LinkStation NAS to Buffalo NAS or another NAS with reliable and professional backup solution in Windows in a few steps.

To be specific, NAS for Business is build with featured storage technologies such as RAID, hot spare and real-time replication, which provides effective solution with value performance and reliability. NAS for Home, on the other hand, lays emphasis on capacity, data protection and home entertainment features. The last one is an all-in-one turnkey surveillance solution for small business and home users indeed. No matter which Buffalo NAS you’re choosing, it is a good idea to back them up, whether to backup NAS to PC or another NAS.

Most PC users would like to backup Buffalo NAS to Buffalo NAS out of two main reasons. One is for data security, and the other is for file transfer. In detail, NAS is used as storage and it is inevitable to store crucial and confidential data here. The original intention is fine and want to keep data safe when there is unsuspected disaster happens one day. However, what if this disaster happens on the NAS? You cannot emphasis too much on the importance of backup when it is related to your data. Thus, backup the backup if you can. Backup the Buffalo NAS to another just like someone backup QNAP NAS to QNAP NAS for secure.

As covered, if you make Buffalo NAS backup to another NAS, you can realize data transferring. You can share files regularly without user interaction to another NAS user with scheduled backup. Other than these two reasons, you may have other arguments to do the NAS to NAS backup. What counts next is finding a way to figure this out.

How to perform Buffalo LinkStation NAS to NAS backup in Windows?

To backup NAS, you need a professional backup utility that is able to connect both NASes. There are many backup solutions on the market and this AOMEI Backupper Professional is the one that you don’t want to miss. This software allows you to backup NAS/network share to NAS/network share in Windows 10, 8.1, 8, 7, XP and Windows Vista. You can password protect the backup image, compress image, split image and backup only used space of the NAS to speed up the backup process in Backup Options. Besides, you can set scheduled backup tasks with Daily, Weekly, Monthly and Event-trigger modes in Schedule. Also, you have options to manage backup storage by deleting old backups automatically in Scheme. Keep reading to find more.

Step 4. Now choose the destination path. Click the box to add the other NAS location by repeating above moves. 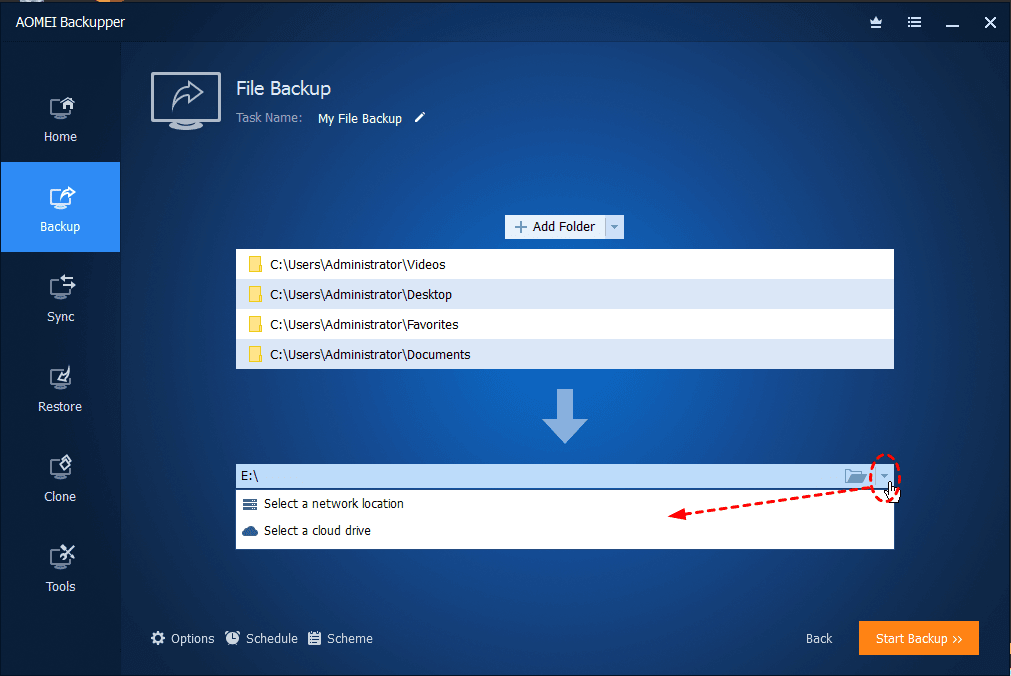 Step 5. You can configure more customized settings in these options: Options, Schedule, Scheme. Click Start Backup when you finish.

The process of Buffalo NAS to NAS backup is not that complicated as you thought, is it? You can easily get data back when bad luck happens. Apart from backup NAS to NAS, AOMEI Backupper can assist you backup NAS to external drive as well.

Tips: AOMEI Technology has released AOMEI Backupper Network which enables you to backup multiple computers over network on one central management console.