Instead of purchasing storage devices for backup, you can actually free backup PC to Dropbox, a very popular cloud drive service.

Where should you save backup files?

To create backups is inevitable in case of data loss caused by any unexpected things. It is crucial to keep the backup to another location where no system resides. Therefore, many people have purchased extra hard drives, external drives, NAS devices or other storage devices to serve as a backup drive. Nowadays, many cloud storage services have been introduced, some of which are totally free. You can also consider saving backups to a cloud drive rather than backup to external hard drive.

DropBox is one of the most popular cloud drive providing both free and paid service. If you want to have cloud backup, you can choose the DropBox Service to backup PC to DropBox. One of the main advantages of saving backups to a cloud drive is that you can access the backup on any devices anywhere. Therefore, even if the original hardware is complete failed, you can still get the backup as long as you have an internet connection.

Use Dropbox to backup computer data

Speaking of using Dropbox for backup, you may think of the most commonly used 2 ways. The first one is to download the Dropbox and install it on your computer, then just drag and drop the files you want to backup into the Dropbox folder. The second one is to upload files or folders on the dropbox.com. 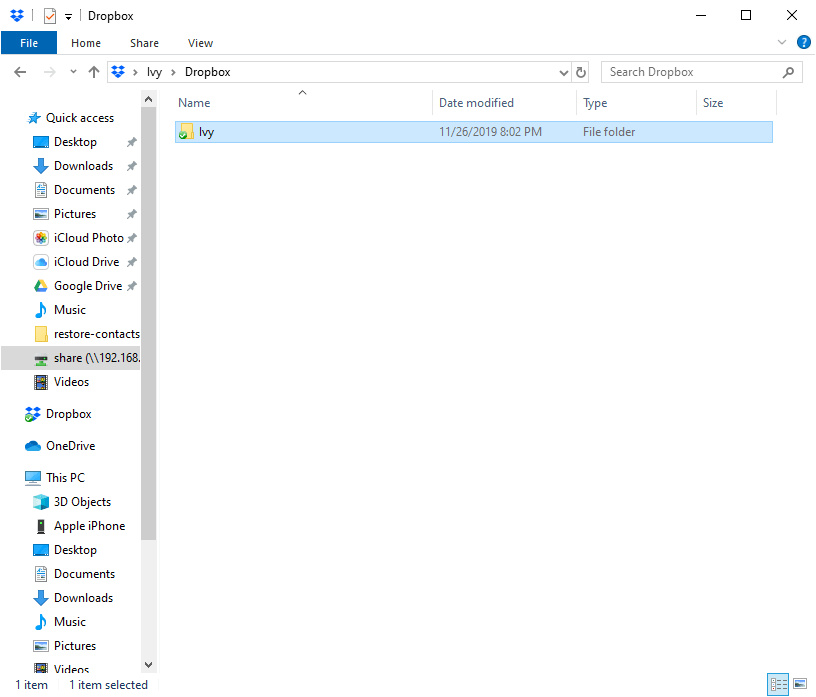 However, I have to say that Dropbox is a sync tool instead of backup tool. And here are some disadvantages of it.

In sum, Dropbox is not good choice if you want to continuously protect and recover your data. To achieve that goal, you’d better use a free backup software AOMEI Backupper Standard. Just a few clicks, you can finish the backup process without any obstacles. Then, you can restore files at any time.

Use AOMEI Backupper to backup laptop or desktop files to Dropbox

To automatic backup Windows to Dropbox, you can set up a scheduled backup to the local DropBox folder with AOMEI Backupper and then the image backup will be automatically synchronized to your DropBox drive in no time.

Why use AOMEI Backupper to backup data on laptop or desktop? Here are some reasons for it.

If you just want to backup PC files to Dropbox, the free version is enough. If you want to enjoy more advanced features, such as, backup files with certain file extension, delete backup files before backup disk full, etc, you can upgrade to its advanced version, such as, AOMEI Backupper Professional.

How to backup computer files and folders to Dropbox

To backup data on computer to Dropbox, you should download and install the DropBox desktop application on your computer if you don’t have one before. In order to keep your backup up to date, it is recommended to create scheduled backup.

To create automatic backup with Dropbox:

2. At the main page of screen, under “Backup” tab, select “File Backup”. You can also perform “System Backup”, “Disk Backup”, or “Partition Backup” if you like.

3. On the next page, you can select any folders or files that you want to include in the backup by clicking “Add File” or “Add Folder”.

4. Specify the local Dropbox folder as the backup target location. Just click the inverted triangle and "Select a cloud drive". then pitch on the Dropbox in the next window. 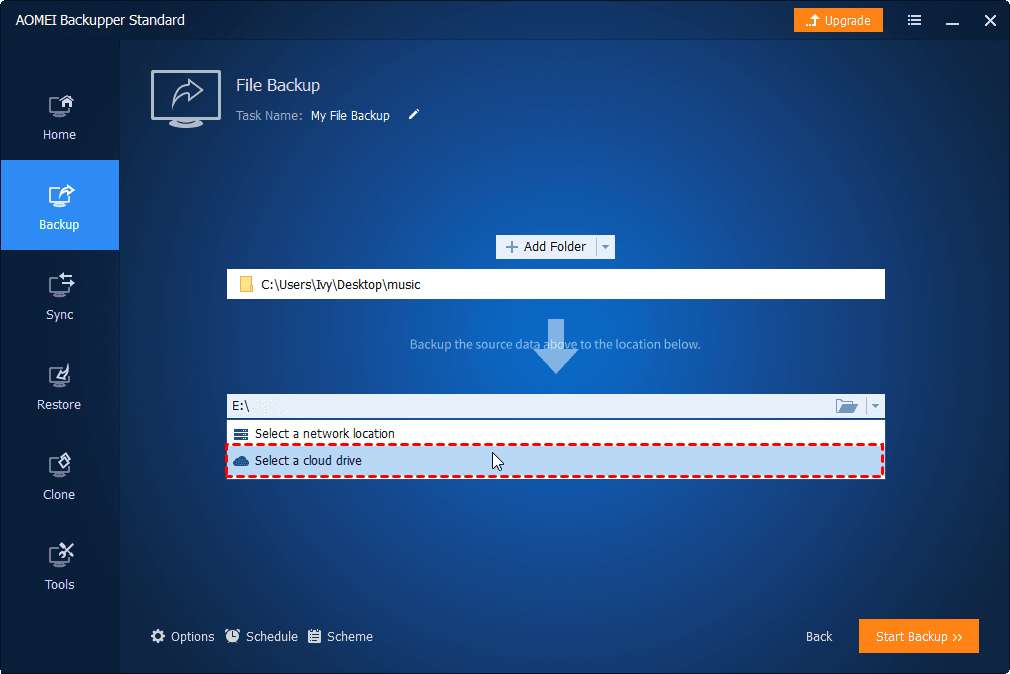 5. Then pitch on the Dropbox in this window. 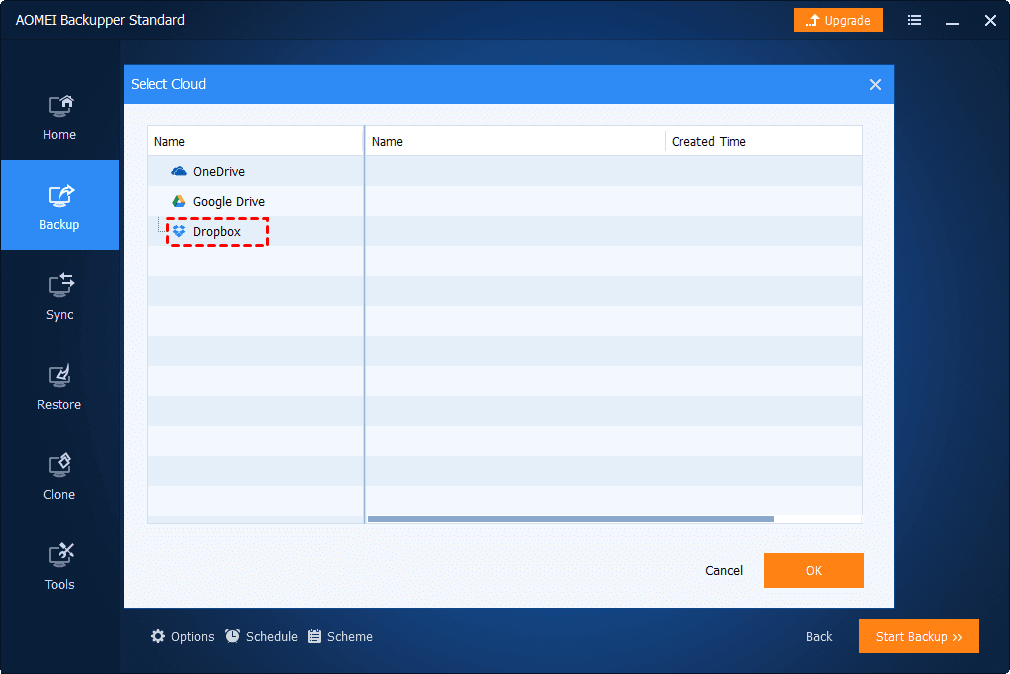 6. Click “Schedule” to decide when you want to the backup to run automatically, and you can also decide to run an incremental backup, differential backup or full backup. Also, you can click “Options” to see more options. After that, click “Start Backup” to start the pending operation.

To backup files in a better way, you could consider using the following features.

The first two features are only available on the paid version, such as, AOMEI Backupper Professional. If needed, please upgrade to the advanced version.

Usually, the backup will be complete quickly unless you have included a large amount of data in it. Then in a short while, the image backup will be automatically synced to your DropBox cloud.

You May Also Like
Top Two Ways to Automatically Upload Photos to Dropbox
How to Free Backup Windows PC to OneDrive/Google Drive/DropBox?
Can I Backup Dropbox to External Hard Drive Safely?
How to Sync Local Folder to Dropbox? (2 Ways Included)
Backup PC to Cloud in Windows 10/8/7 for Free