How to Transfer Windows 8/8.1 Installation from HDD to SSD

Transferring/Moving Windows 8/8.1 installation from HDD to SSD can optimize the performance of computer effectively. But how to do it? AOMEI Backupper Standard will bring a very simple way.

Today, Windows 8/8.1 is widely used around the world. Most of the computers use a hard disk drive (HDD) to store the data and information. The traditional HDD is the most basic storage disk of computer and it is a metal platter with a magnetic coating. The data can be read and written while it is spinning. However, this kind of disk can be broken easily.

Fortunately, technological development brings a new storage disk - solid state drive (SSD), which is made by solid state electronic storage chip. So the SSD stores data on the memory chip without platter spinning.

Why we want to transfer Windows 8/8.1 from HDD to SSD?

We transfer Windows 8/8.1 from HDD to SSD mainly because of the advantages of SSD over HDD.

Windows 8/8.1 doesn’t have the function to move the system from HDD to SSD. So, you need to find a third-party software to help you. Considering the features and price, here we highly recommend AOMEI Backupper Professional to you. It has many powerful functions that are worth paying for.

💜 You can use it to backup your computer OS and restore your computer to an earlier date via the System Backup and Restore features.
💜 You are allowed to move Windows installation to a new hard drive directly with the System Clone feature.
💜 You are able to create bootable media so as to boot your computer in case of boot failure.

You don’t have to worry if you want to upgrade the system, because AOMEI Backupper supports all the Windows PC operating systems including Windows XP/Vista/7/8/8.1/10/11. This software is easy to use. With its help, moving Windows 8/8.1 from HDD to SSD could be a piece of cake.

Here are the specific steps of transferring Windows 8/8.1 from HDD to SSD. Before you do, you need to prepare an SSD that is enough to store the system files.

Step 2. System Clone will select the system partition(s) as the source partition(s) by default. You can select the destination partition here. Click it and it will be green. Click Next.

Step 3. It will pop out a window to remind you that the destination partition will be overwritten or deleted and ask if you are sure to continue the operation. If there is no problem, click OK to move on.

Step 4. Here is the summary of the whole operation. You can see the two options at the bottom of this window.

After all the settings, click Start Clone to launch the progress. 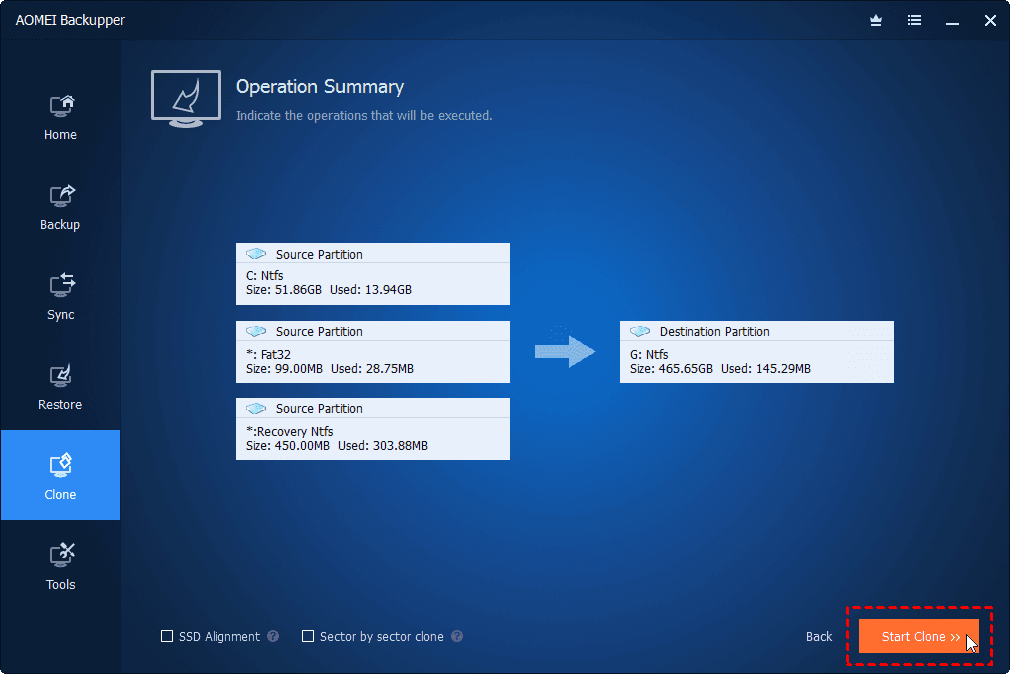 AOMEI Backupper can finish many tasks with a few clicks. To migrate Windows 8/8.1 from HDD to SSD, you can also create a system backup image of Windows 8/8.1 on HDD and restore system image backup to SSD. If the cloned SSD works well after a period of time, you can run DoD disk wipe on the old HDD to release storage space.