Interested in XXClone for Windows 10? This guide takes a simple look at XXClone’s main features and shows how to clone a hard disk with XXClone and its alternative.

XXClone is one volume cloning software that can help users copy Windows system disk or volume into another disk with the system files, installed applications, and all of your data files. It makes the target disk self-bootable so that you can swap your main disk and work with the cloned one without the restoring process.

It provides three versions, XXClone Freeware, XXClone Home, and XXClone Pro. And you need to pay for the last two editions which are embedded with more features. This software works well in Windows 10/8/7 and supports FAT16, FAT32, and NTFS partitions. The source and the target volume can be of different file systems. With the intuitive user interface, it is easy to operate XXClone.

How to clone a hard disk with XXClone in Windows 10

If you plan to clone a system disk, you can download XXClone Freeware to complete the task. As for non-system volume backup, it is only supported in XXClone Pro. In addition, there are two limitations you should know:

● XXClone will not allow you to set a Dynamic Disk as the target volume.
● It backups only volumes instead of the whole hard disk. This may disappoint some users who want to migrate data from HDD to SSD.

If you just want to clone the system volume, then check the following steps to finish the task via XXClone. Or if you want to clone the entire hard drive, please refer to the next part to get one XXClone alternative to help you make it.

1. First get XXClone download for Windows 10 and launch it. Select the source and the target volume depending on your situation. You may use the one-click button provided by XXClone to invoke the Disk Management utility and affirm the volumes you select. 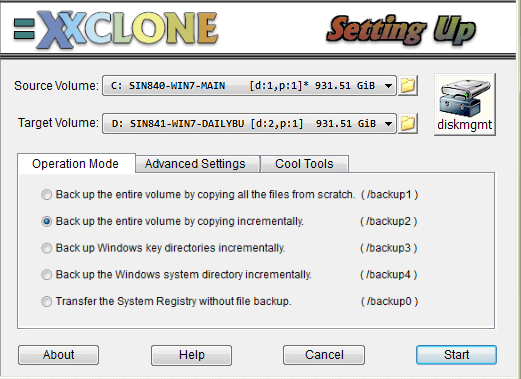 Now you see how to clone hard disk with XXClone in Windows 10. However, some users are confronted with XXClone Pro errors. They find XXClone expired after one-year use, leaving the Start button greyed out. What’s more, some users encounter XXClone boot error, such as no bootable device found, a computer disk hardware configuration problem and so on. That sounds troublesome! Can we avoid all the errors?

To get a quick workaround to XXClone errors, you may choose an XXClone alternative. I’d like to recommend AOMEI Backupper Professional to you.

Download AOMEI Backupper now to explore it by yourself. (* The clone operations can only be demonstrated in the trial version. To conduct the operations, please upgrade to the full version.)

Learn how to clone the entire system disk via AOMEI Backupper below:

Note: Backup files on the destination disk before cloning, because they will be overwritten during the cloning process.

Step 2. Select the source disk that you want to clone and click “Next”.

Step 3. Select the destination disk to store the cloned data and click “Next”.

When you consider cloning hard disk in Windows 10, you can either pick XXClone or AOMEI Backupper. AOMEI Backupper provides a quick workaround to XXClone in Windows 10 in case that you meet XXClone errors. You can clone the whole hard drive or only selected partition.

Additionally, AOMEI Backupper is superb backup and sync software. You can use it to backup installed programs and sync local folders to OneDrive. Don’t hesitate to get this tool and enjoy more powerful functions from now on!

You May Also Like
Best Free Disk Imaging Software for Windows 7 – Download Here!
How to Clone Hard Drive in Windows 10 64/32 Bit?
Your Best SuperDuper Equivalent for Windows 10/7