How to solve the problem now enough space in Xbox 360? You can delete some items to free up more space or upgrade to a larger drive.

When will you receive the error?

When you are trying to install games, demos, movies or the Kinect software, you may receive the not enough space in Xbox 360/one error. This means you need to delete a few things on your device before you can install because there is not enough storage space for this. In this case, you need to delete some old items to get more free space.

How to clear space on xbox 360 hard drive

You can follow the step by step guide to see the available disk space and fix the Xbox 360 not enough storage space problem. 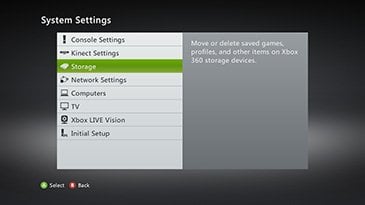 3. Then you can see how much storage space on your hard drive is free to use. If you need to install a Kinect update, which proximately needs 175 MB of space, you can select a few things to delete accordingly. 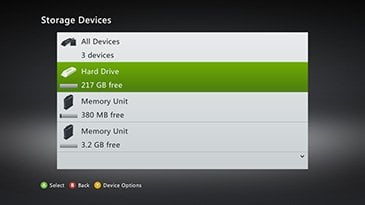 4. Click on the drive and then it will bring you a list of items. You may want to delete game trials, movie rentals or whatever you don’t use anymore.

5. Select the items you want to delete and select “Delete”.

As a matter of fact, users often concerned about Xbox one not enough space problem. It is recommended to upgrade Xbox 360 hard drive with a larger one rather than delete some stuff when every time you want to install something new. Luckily, most of the 2.5" hard drive, if not all, can be used to upgrade your Xbox 360.

Once for all solution

When you get a large 2.5" hard drive, you can clone the Xbox 360 hard drive to the new drive and replace it. In this way, you will lose no games or installed apps. As the hard drive cloning software, you can choose AOMEI Backupper that allows you to clone Xbox 360/4 hard drive to another one without data loss. You will need few tools to take out the original hard drive and connect it with a PC running Windows 10/8/7. After that, you can follow the steps below to process the clone.

1. Download and run AOMEI Backupper when you finish connecting the new hard drive and the original one.

3. Select the XBOX 360 hard drive as the source disk and the new hard drive you want to clone to as the destination disk.

4. In the next screen, click “Start Clone” to start the clone.

Then the hard drive clone process will be complete in the background, and in the meanwhile, you can still use the computer. When the clone completes, install the cloned drive to your XBOX 360and then not enough space in Xbox 360 will never be an issue of yours. What’s more, you can also backup Xbox 360 hard drive and then restore it to the new hard drive using AOMEI Backupper.