How Backup All Computers on Network Effortlessly?

Need to backup multiple computers? You can backup all computers on the same network with centralized backup software.

Why do you need to backup all computers on network?

Every user has stored valuable data on his or her laptop or desktop, but everyone realizes the importance of data backup. If you are one of those people who are responsible for data security of your school, company or other organizations, you need to either make them do backup or backup all their computers for them.

You may have heard some ways about how to backup all computers on the same network, but they are too complicated to follow need to spend much time to configure it. If you do not have that many computers to backup, it may not be worth the headaches caused in implementation.

Is there a centralized backup solution that can do this without much effort?

Free backup software for backing up computers on network

There is centralized backup software - AOMEI Centralized Backupper, that help you backup all computers within the same network with easy setup steps. You can use it to backup desktops, laptops, Windows servers, virtual machines on the network to a shared folder or network attached storage (NAS).

Once you have set up the backup, you can also create a schedule to backup all the PCs automatically. It is supported on Windows 10/8/7, so you do not need to buy a Windows Server to backup all client computers.

It comes with many useful features to ease your tasks:

Once you have installed the centralized backup software on your center computer which you use to control all the backup tasks, the program will automatically scan and list all the computer on the network.

Then you can install this backup software on all the client computers, so you do not need users to install it on client computers one by one. You will need to enter the username and password during the process. In the meantime, you have gained control of all the computers on network.

Among all your computers, you can divide them to a few groups to use different backup schemes. For example, you may want to backup some of the computers more frequently, while others less frequently.

Customizing backups based on your preferences and needs. For example, add comments, encrypt backup images with passwords, choose backup compression level, split backup images and so on.

When you manually start a backup or a scheduled backup is triggered, the client computer will not be interrupted because the backup will be performed in the background. All the targeted files will be backed up even when they are being used due to VSS technique.

How to backup all computers on network

You can use this free tool to backup all your computers on home network or business network. You can refer to the steps below to backup all computers: 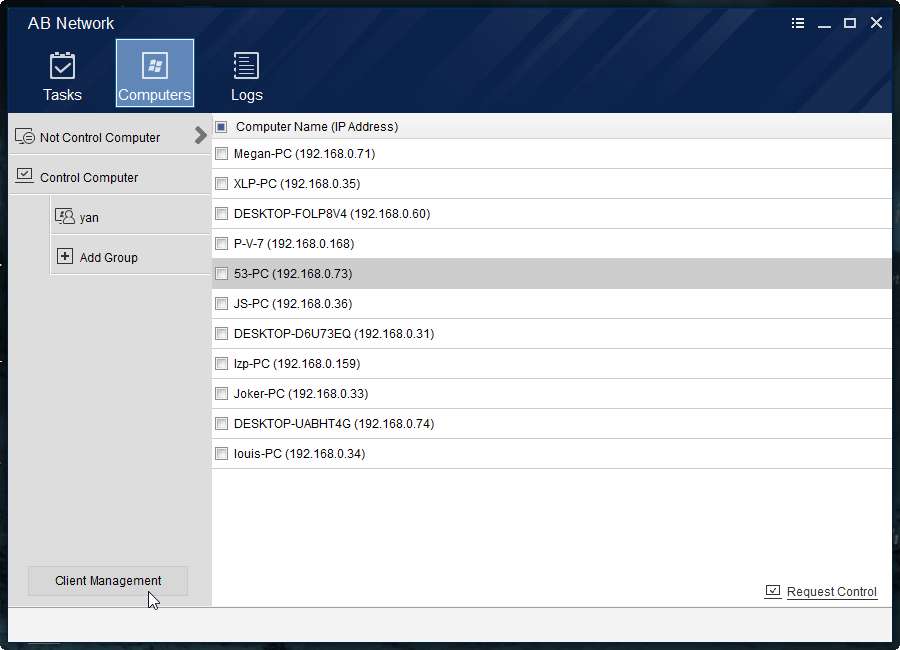 3. If you choose to manually install this software, you need to click Request Control at the lower right corner to gain control of the client computers. You can simply type username and password to gain control. 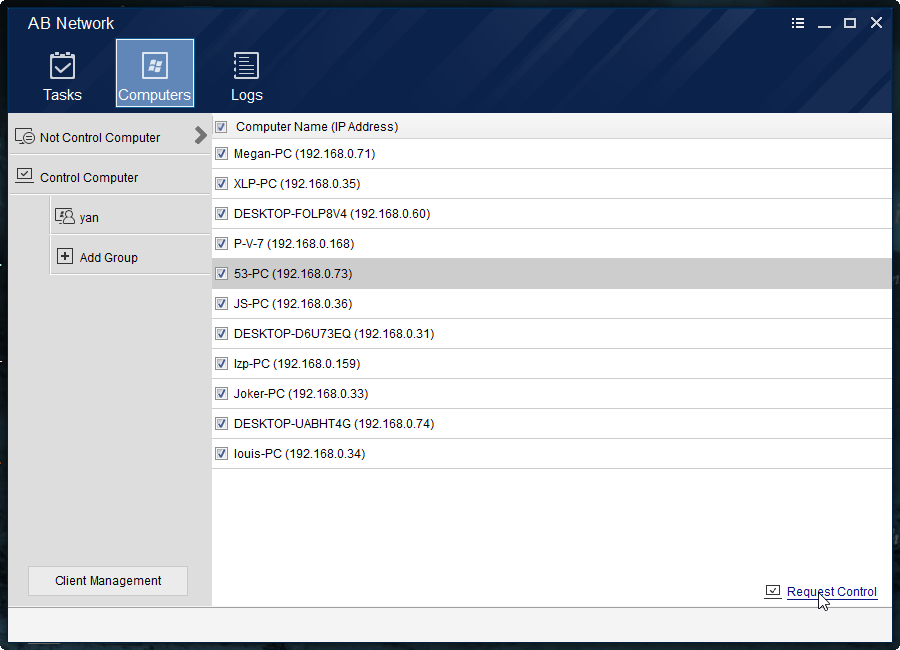 4. Click Task tab and select System Backup, Partition Backup, or Disk Backup depending on what you want to include in the backup. 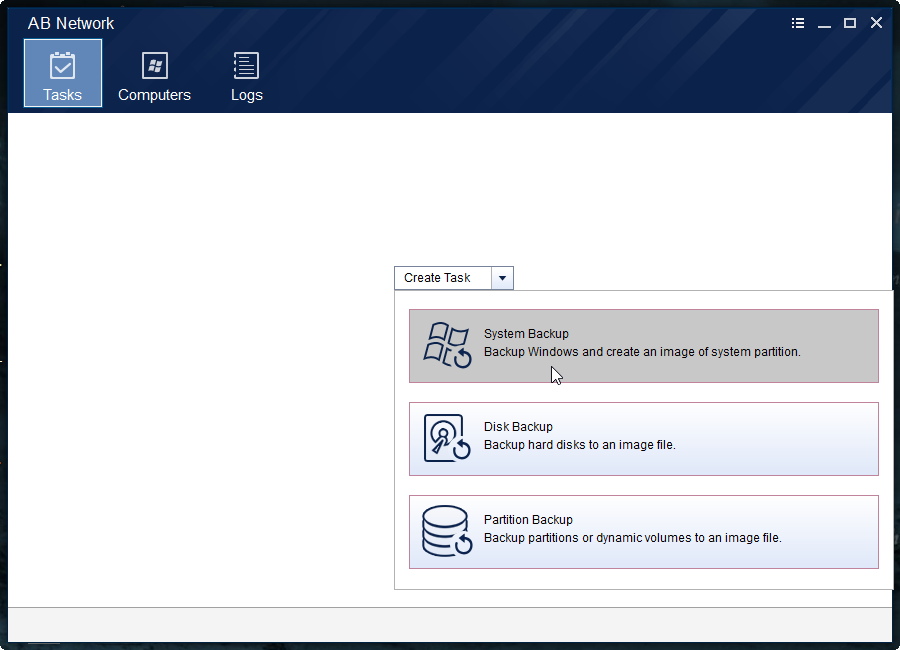 5. In the next screen, click Add Computer to choose which of the computers on network that you want to backup.

6. If you have selected System Backup, just click Step2 to set up a network location to store the backup files. 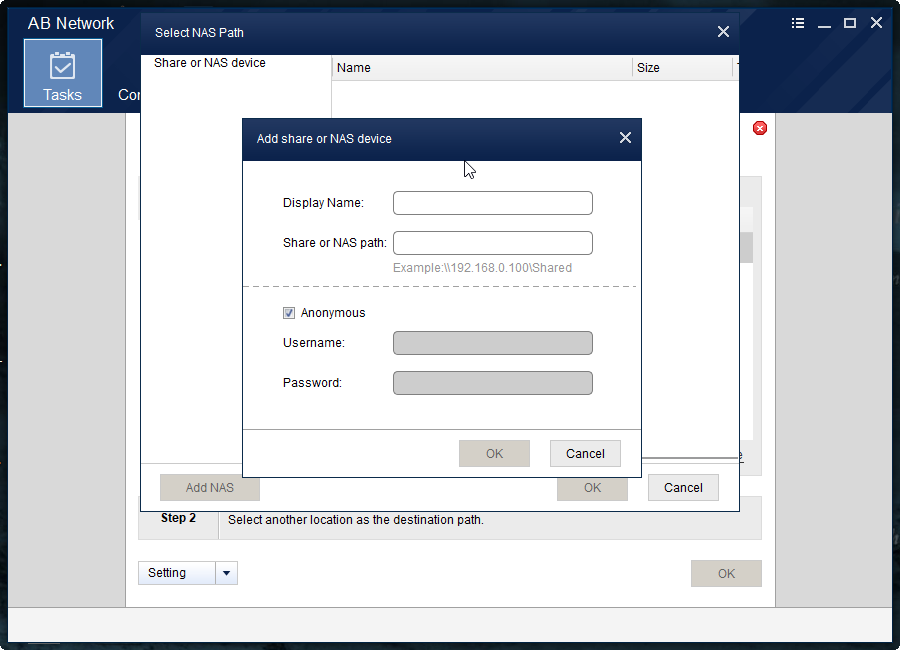 7. Under settings, you can configure a schedule to backup selected data automatically. After that, click OK to run this backup or add this scheduled task. 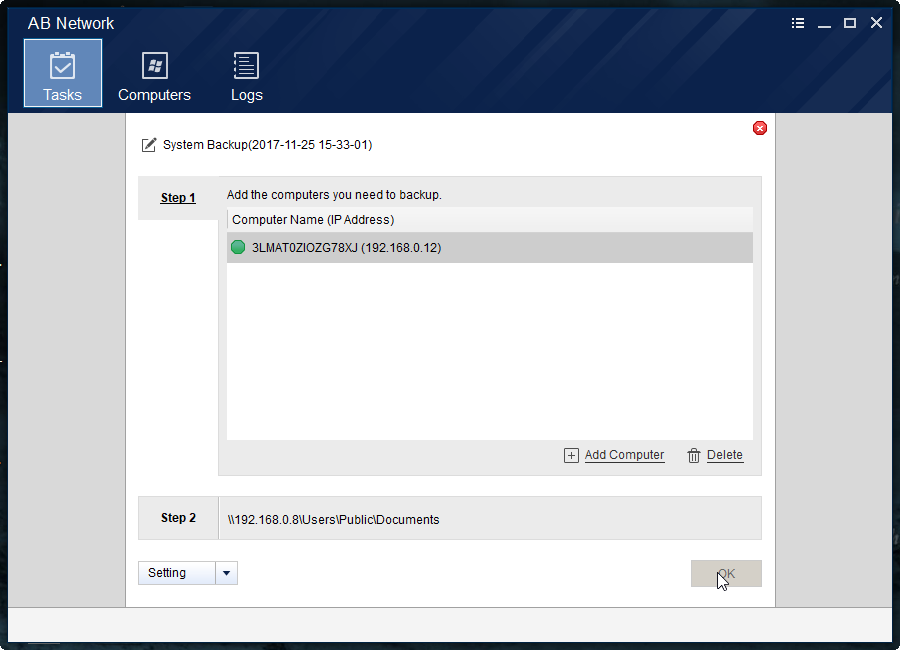 As you can see, it is very easy to backup all computers on network with AOMEI Centralized Backupper. By default, scheduled backup will be performed as incremental backups to save disk space and backup running time.

If one of the computers backed up is crashed, you can restore it back in a very short time. You can restore the backup to dissimilar hardware without reinstalling Windows and transferring data.