How to Recover Deleted Files in Windows Server 2012 R2

How to recover deleted files in Windows Server 2012 R2? In fact, you can restore files from backup or previous versions and it works even for permanently deleted files.

The Issue: files are deleted accidentally in Windows Server 2012 R2

Data loss is a common issue that troubles users a lot and there is no reason or just being deleted in an accident. Usually, Word and Excel keep a copy for a short while. Look in the Options, File Locations area to get them back. And you can get files back in the Recycle Bin if it is not too large.

But if it's too large, it will delete files permanently. Also, if you empty the Recycle Bin, the deleted files are gone forever. Even so, you can recover deleted files in Windows Server 2012 R2 from a backup image or previous versions. Please continue to read below and learn the methods and steps carefully.

In the first place, it is not suggested to re-write data to that volume or path where you’ve lost files. As mentioned, data loss is troublesome (such as Ransomware WannaCry), so many users have the awareness of data backup.

The very first way that you can use to recover deleted folders or files in Windows Server is the Windows Server Backup images, and the precondition is you’ve imaged Windows Server 2012 in advance. And the second way is to restore files from previous versions with the help of shadow copies.

Step 1. Open Windows Server Backup from the tools menu. In the wbadmin console, select Local Backup and then Recover in the right pane. 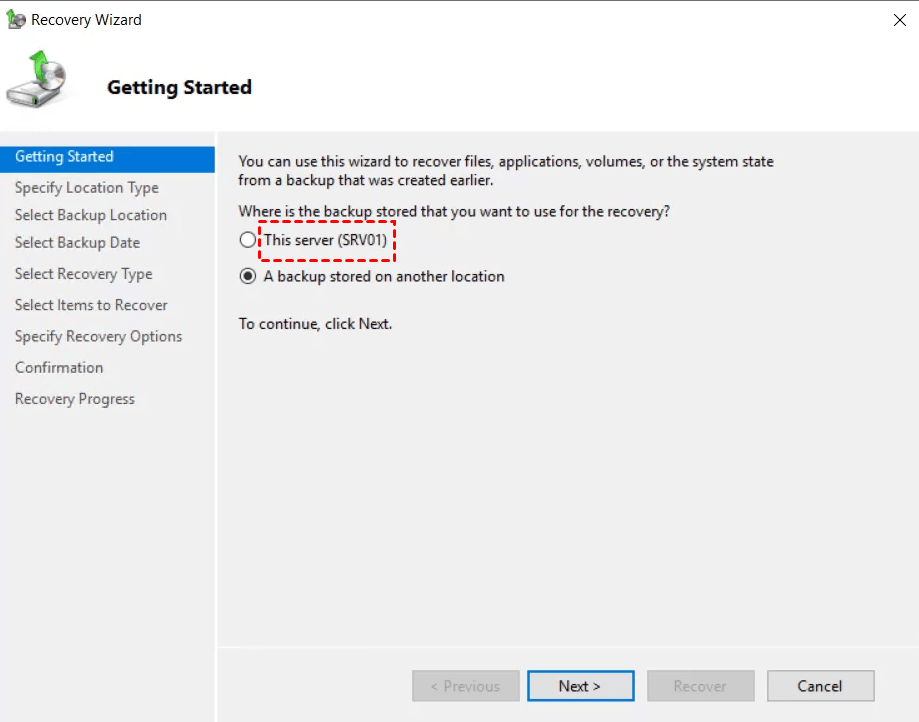 Step 3. Select the Backup Date, the time when your files are not deleted. 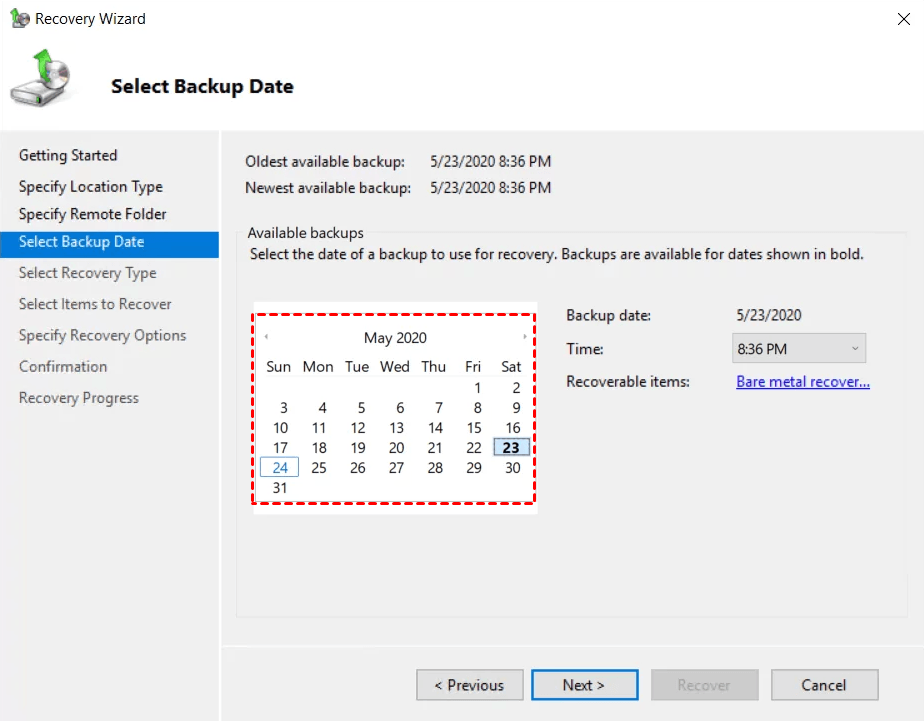 Step 5. On the Select Items to Recover step, expand the server to select the folder that you want to restore. 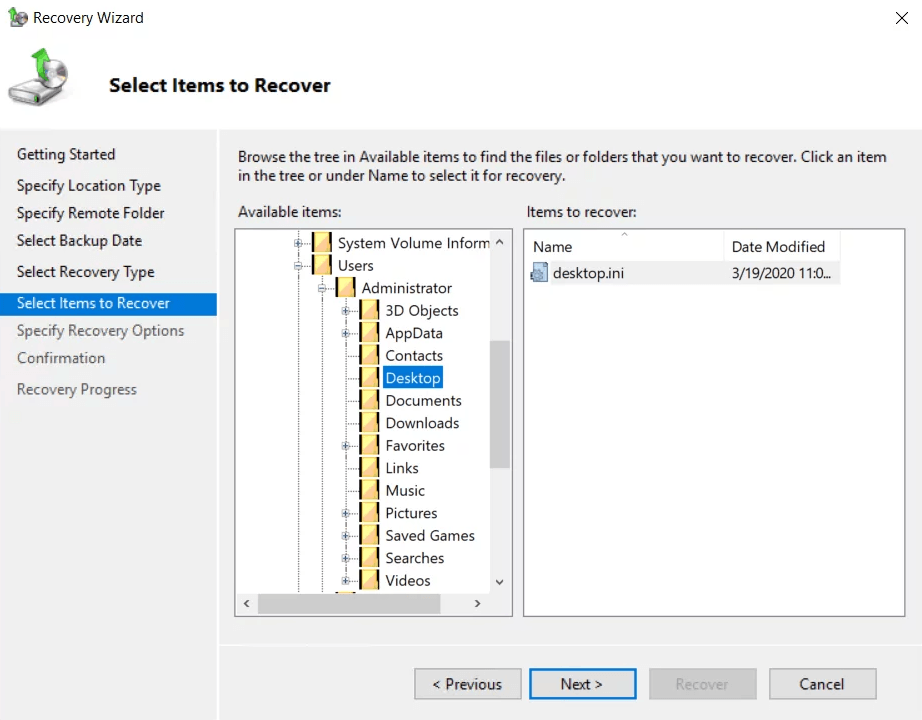 Step 6. On the Specify Recovery Options step, choose Original location normally. You can also choose Another location if you have a different plan. 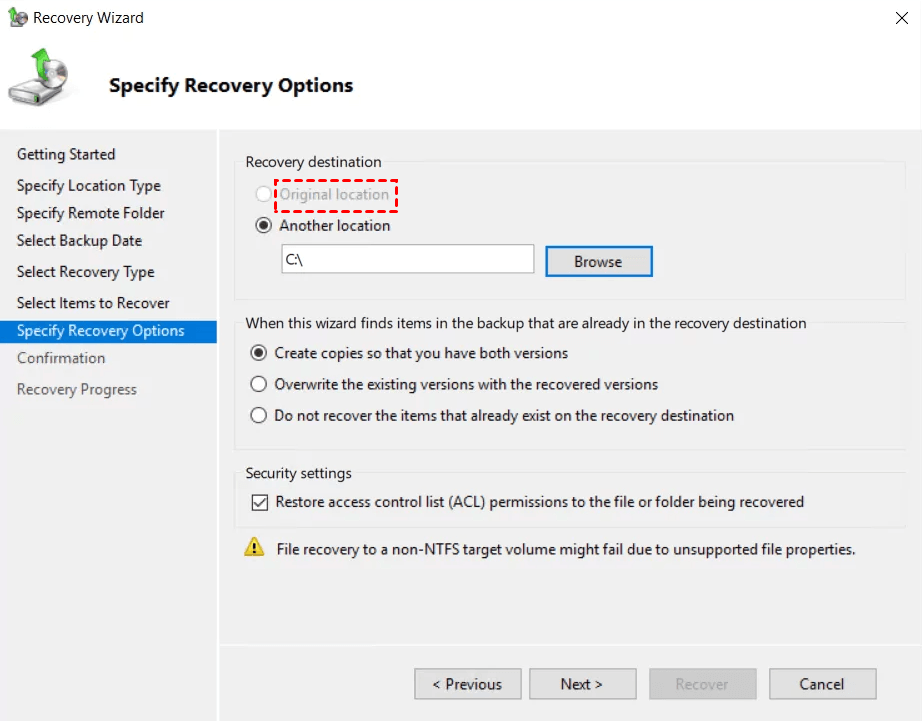 Step  7. On the Confirmation step, be sure you’ve chosen the right files. Click Recover then. Wait for the process to be completed. Close the Recovery Wizard after.

In general, Windows Server creates shadow copies for all saved versions, so you can try to recover deleted files in Windows Server 2012 with the following steps.

Step 3. In the pop-up window, select Previous Versions. It should list the shadow copies. See if there is any file you need. 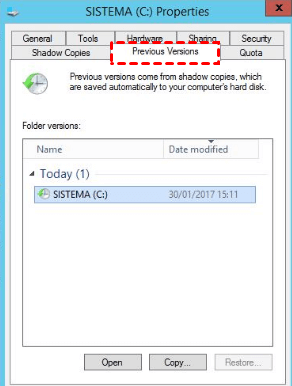 Step 4. Choose the right version and click Restore to start.

Further, some users try to do a system restore to get the files back. If you’re using a domain and server, the system restore will not fix the problem. In that case, it is suggested to recover the deleted files by recovering deleted partitions in Server or using professional Windows data recovery tools.

As mentioned above, Windows backup image and the Previous Versions feature are feasible options for users to get deleted data back; however, many users haven’t formed a good habit to back up files.

In addition, disasters and accidents always fall on people with no clues, leaving no time for users to take precautions.

If you are one of these users, don’t worry, with the help of an efficient Windows data rescue app, it will be an easy task to recover accidentally deleted files from Windows Server 2012 R2.

MyRecover is one of the eligible apps you could utilize.

It is specially designed for Windows users, compatible with Windows Server 2012, 2012 R2, to the latest 2022, facilitating you to recover data easily. 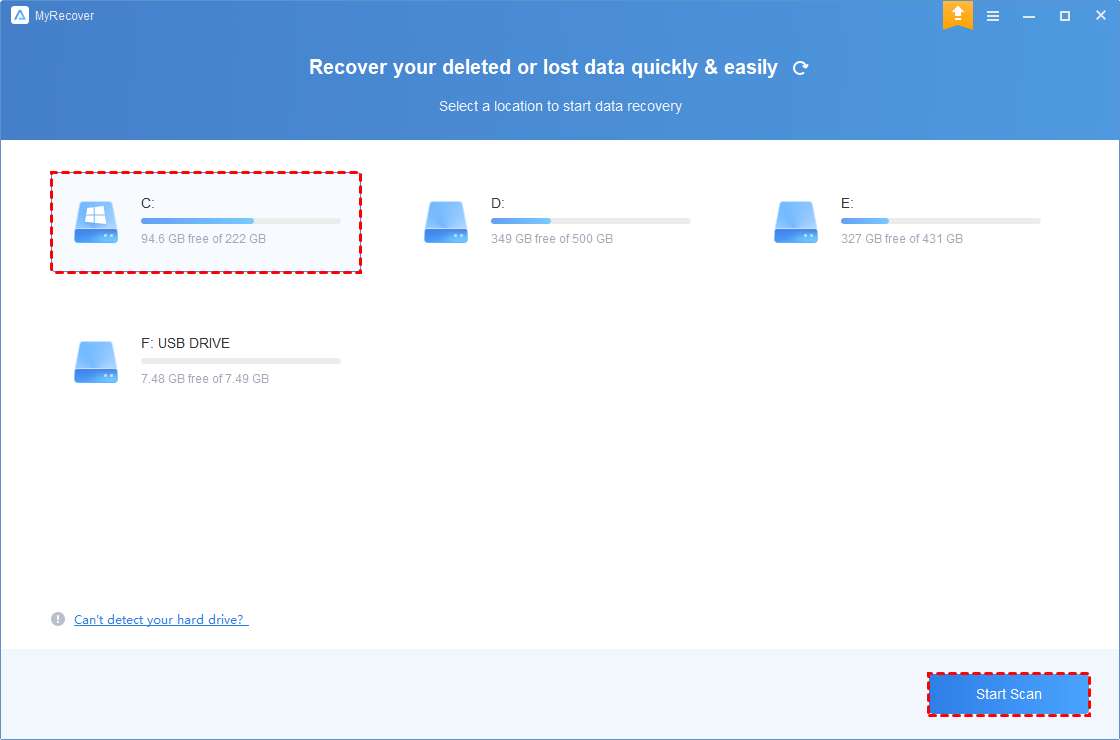 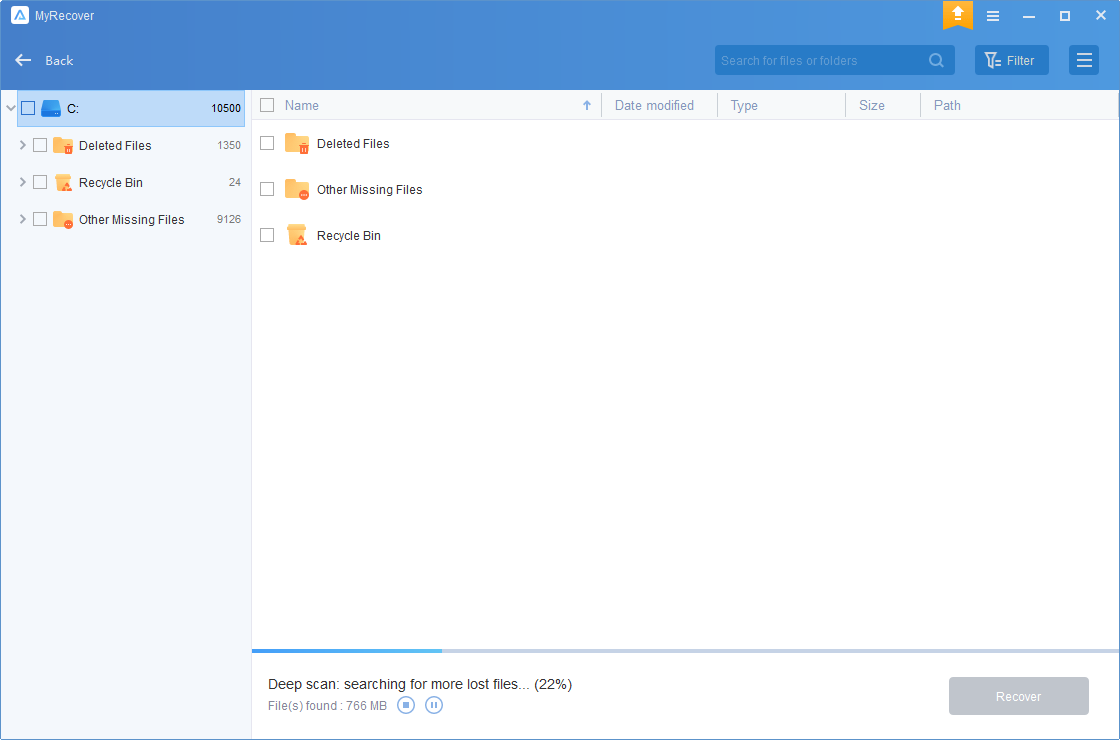 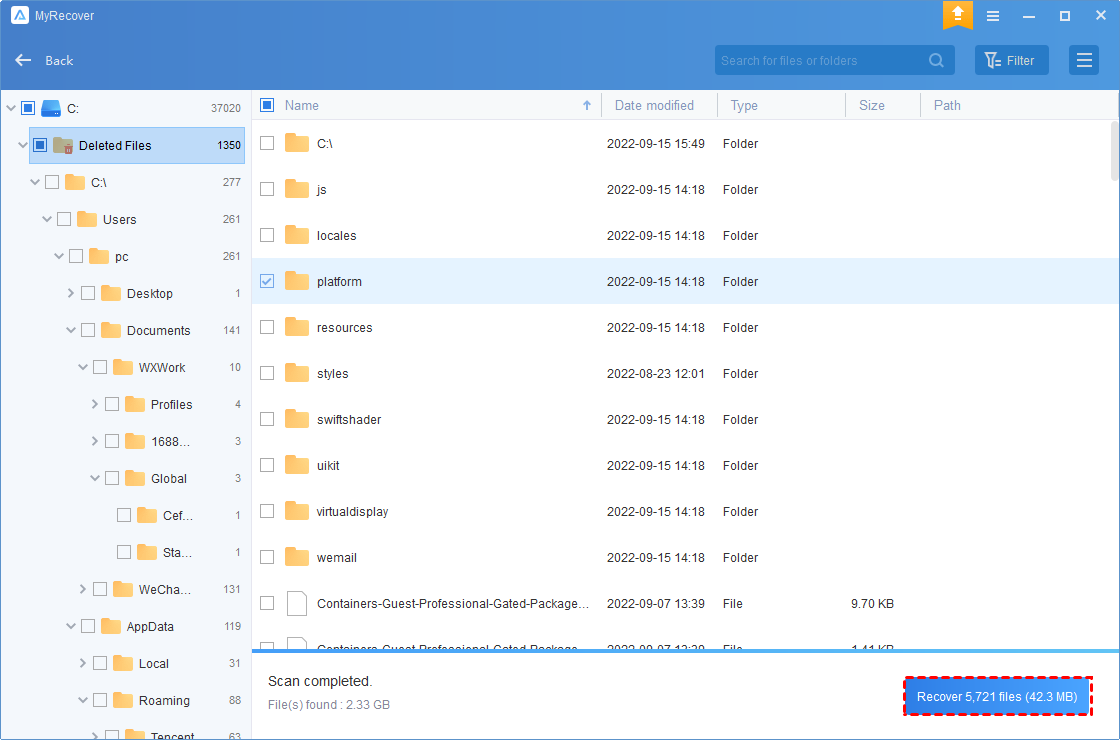 If there is a backup image or shadow copy, you can easily recover deleted files in Windows Server 2012 R2. But if you don't have either of them, you will lose your files without a doubt. To ensure your data is always there, it's suggested to backup files in Windows Server 2012 R2 with a professional server backup software like AOMEI Backupper Server instead of the built-in freeware. Here are the reasons:

Instead, in AOMEI Backupper Server, you can choose to backup files or folders individually, such as documents (eg: word, excel), pictures, music, videos, etc, and run them automatically, such as, daily, weekly, or monthly.

And it provides you with two practical methods in the following and both of them back up only changed files (with incremental backup) by default. Then, which one should you use?

Select File Backup if you want to backup local files as well as network files. And it supports more storage devices, such as, external hard drive, USB flash drive, network drive, cloud drives like Google Drive, etc. More importantly, it still supports differential backup, automatic backup cleanup, etc, which do a big favor in greatly reducing backup time and disk space usage.
Select Cloud Backup if you have an AOMEI account and want to backup files to a cloud drive (here is AOMEI Cloud) without installing the desktop app again. And it still offers you 1TB of free cloud storage in 15 days.

So the File Backup feature is suitable for most users and we will take it as an example to show you the detailed steps. Get the 30-day free trial and have a try.

Note: You can also choose to backup Server 2012 system, the whole hard drive, and individual partitions as per your needs.

Step 2. Click Add File or Add Folder to select the files/folders you want to backup.

Step 3. Select a destination location to store the image file. 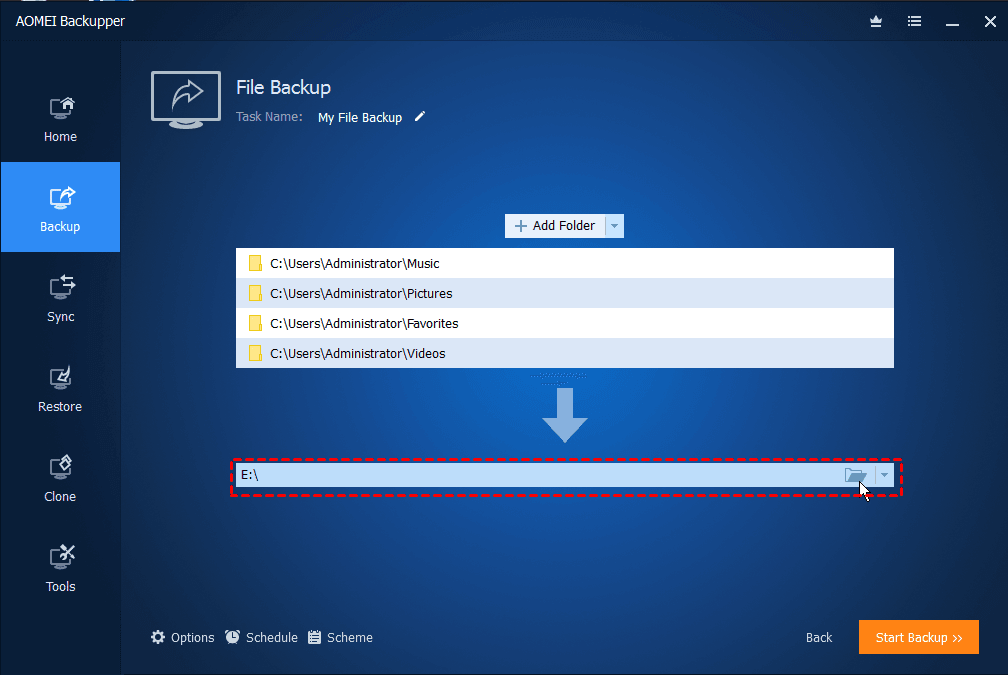 Step 4. Click Schedule Backup to set automatic backup, you have 5 options, such as Daily, Weekly, Monthly, Event triggers, or USB plug in.

Note: If you are worried that you will forget to insert the backup disk, it's suggested to enable the Wake the computer to run scheduled tasks option or automatically backup your files to USB with the plug-and-pull method - USB plug in.

Step 5. Click Backup Scheme, you can choose to keep incremental backup as backup method or change it to differential backup, and set a cleanup method (By quantity, By time and By daily/weekly/monthly) to delete file backup regularly. Then, confirm the operation and click Start Backup to backup files in Windows Server 2012.

When you want to restore deleted files, you can simply click Restore to make it. If you don't have a file backup, you still can try its selective file restore to recover specific files instead of the entire backup image.

To recover deleted files in Windows Server 2012 R2, you can turn to Windows Server Backup or Previous Versions in File Explorer. However, to protect important files in all-round, it is highly recommended to perform file backup on a regular basis.

Besides, AOMEI Backupper Server can not only backup files but also can backup system, disk or partition. In a word, it’s one comprehensive Server backup software that keeps your data safe all the time.

If you want to protect unlimited PCs and servers within your company, AOMEI Backupper Technician Plus is applicable. It offers unlimited billable technical services to clients. It also enables you to copy installation directory for portable version creation.