[Quick Way] How to Backup iPad to Computer Without iTunes

How do I backup my iPad to my computer without iTunes?

Is it possible to backup and restore my current iPad without the use of iTunes? I won't have access to my iTunes on computer. How can I backup my iPad to computer without iTunes? Thanks in advance.

With a bigger screen and longer battery life, iPad gives you a better digital experience. You can lie on your couch or lawn and have fun for a whole day. Especially if you got the M1 iPad that comes with a great performance allowing you to work and play for a whole day. You might be very familiar with your device but not so good at backup. Facing the large amount of data on your iPad could be likely to make you freak out. 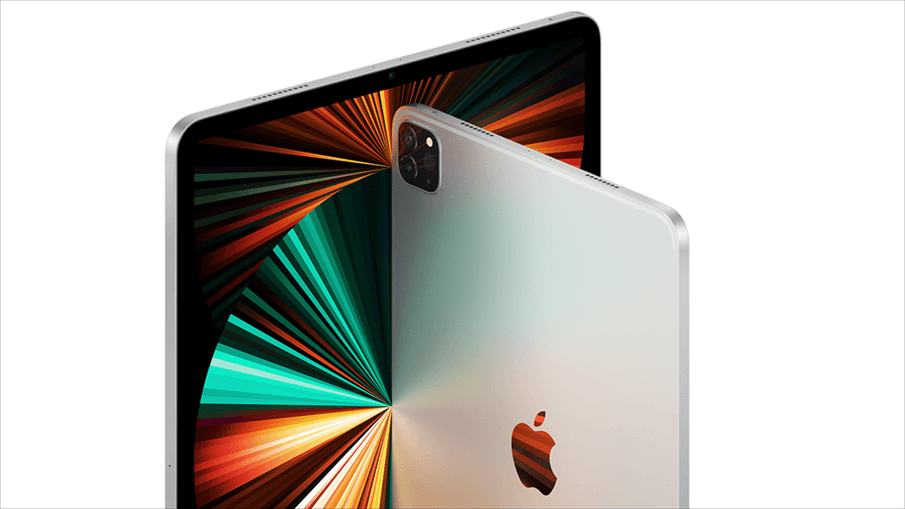 Why do you want to backup iPad to computer without iTunes?

You might have tried iTunes. It is an application released by Apple to allow users to purchase and manage media files on computer, and backup feature is more like an attachment.

• Fail to backup all data on iPad. If you use iTunes to backup your iPad, you could backup most of the local data on your iPad. However, photos, videos, music, and messages in iCloud, Touch ID settings, and information about Apple Pay cannot be backed up. Data of apps on the Internet would not be included, either. They would be downloaded when you connect iPad to the Internet after restoration.
• Unable to preview backup files. You are not allowed to preview them before backing up or view them after backing up. iOS obeys strict rules, and it is like Apple products’ “Character”.
• Unexpected errors happen frequently. Since iTunes is not a professional backup tool, you could encounter kinds of iTunes problems on Windows PC during the backup process.

Therefore, you may want to backup iPad to computer without iTunes. Keep reading, the iTunes alternative mentioned in this article below can be a nice choice for you.

Backup iPad to computer without iTunes but AOMEI MBackupper

AOMEI MBackupper is an excellent free iPad backup software, which can be seen as one of the best iTunes alternatives but with more powerful backup functions.

Two Options to Backup iPad to Computer: For the Custom Backup function, it allows you to preview the files and gives you options in every step. You could backup every single files rather than the whole folder. While the Full Backup function enables you to create a full iPad backup just like what you do in iTunes in a quicker and easier way.
Super Fast Speed: With a stable connection between iPad and computer, you could transfer 100 photos in 2 seconds with AOMEI MBackupper.
Wide Compatibility: It supports most iPad models including iPad Air, iPad Mini, and iPad Pro, as well as iPhone and iPod Touch. It would be perfectly compatible with the latest iOS 15.

Next, this part will separately explain how to selective backup an ipad and create a full iPad backup on a computer with this tool.

AOMEI MBackupper is very easy to use. Follow the 3 steps below to complete backup task.

Step 1. Download AOMEI MBackupper to your computer for free. Connect your iPad to computer and tap Trust on your iPad. 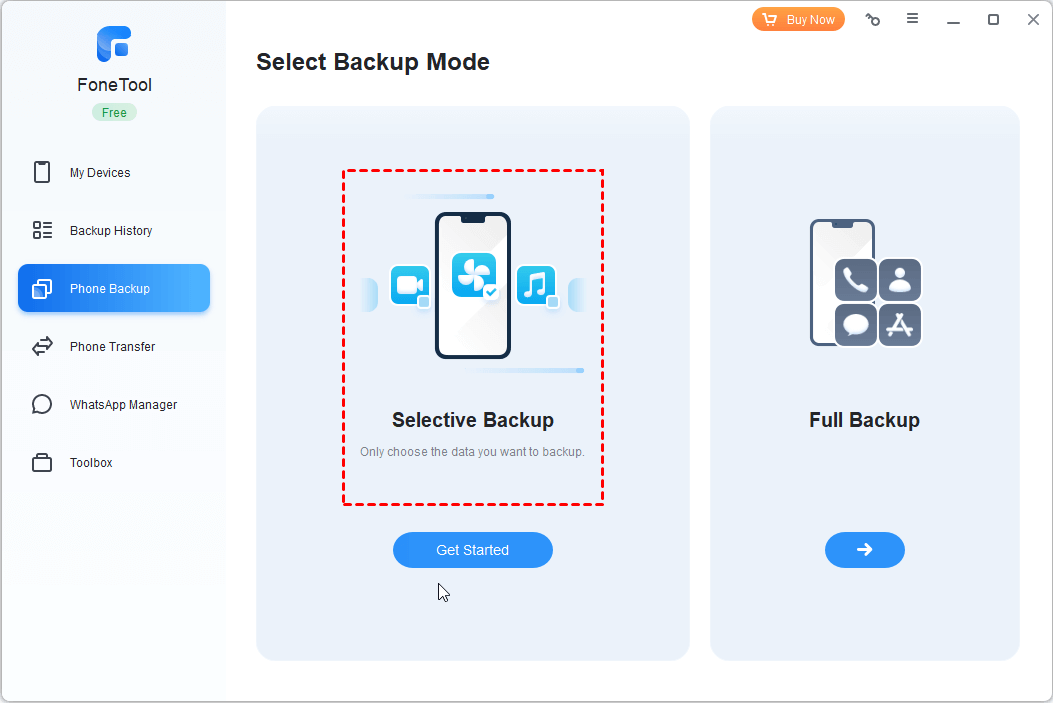 Step 3. You could check the icons of each type of file to select the wanted files on your iPad. Click the orange button OK to confirm. 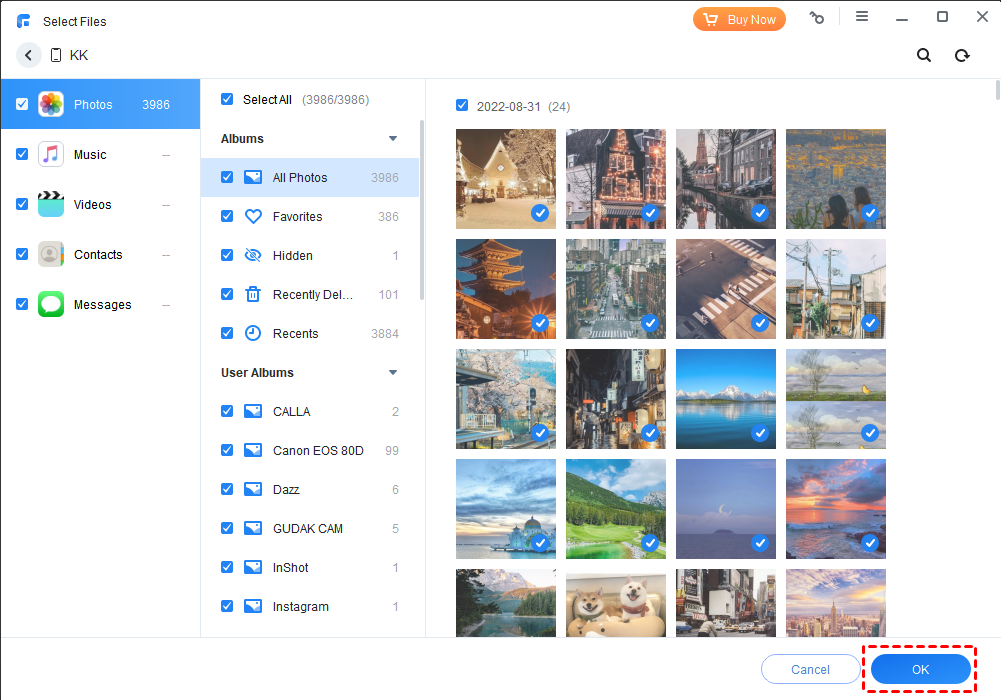 Step 4. Click on Start Backup in the lower-left corner and backup task is completed. You're free to choose a destination to save the backup. Backing up iPad to external hard drive, local folders on computer are all permitted. 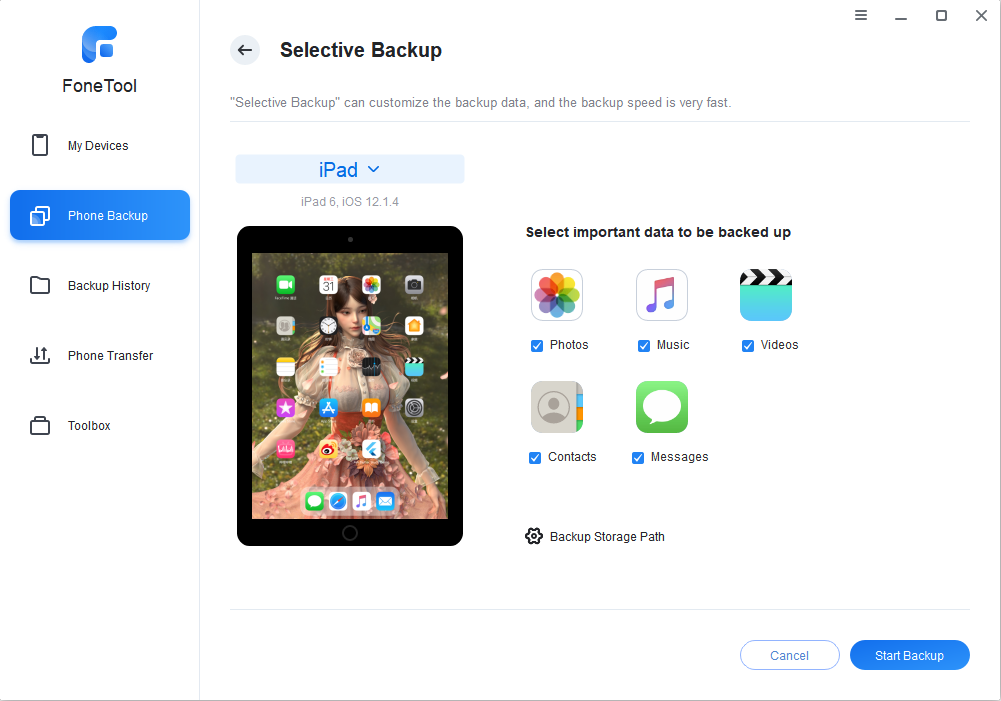 When you need to restore or browse the backup file, just connect your device, select backup task and click the arrow icon to access it. 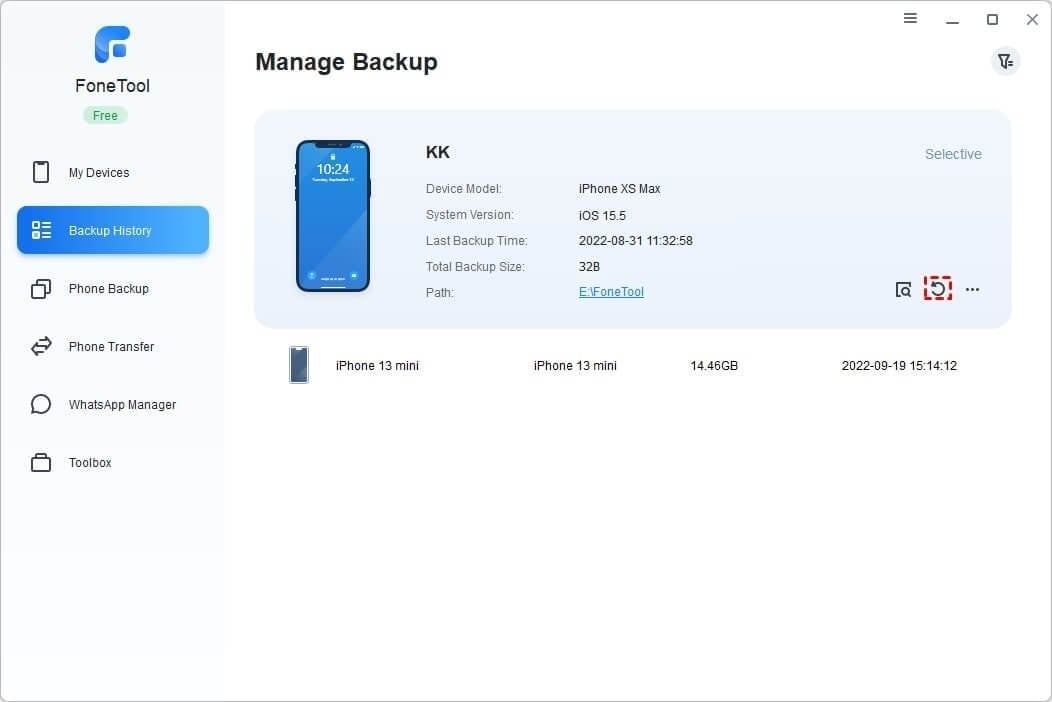 If the Custom Backup function is not enough for you, you can also utilize the Full Backup function to backup all data on your iPad. It's quite useful for you to fully backup and restore iPad especially when you'd have to factory reset iPad or switch to a new iPad but don't want to lose anything. 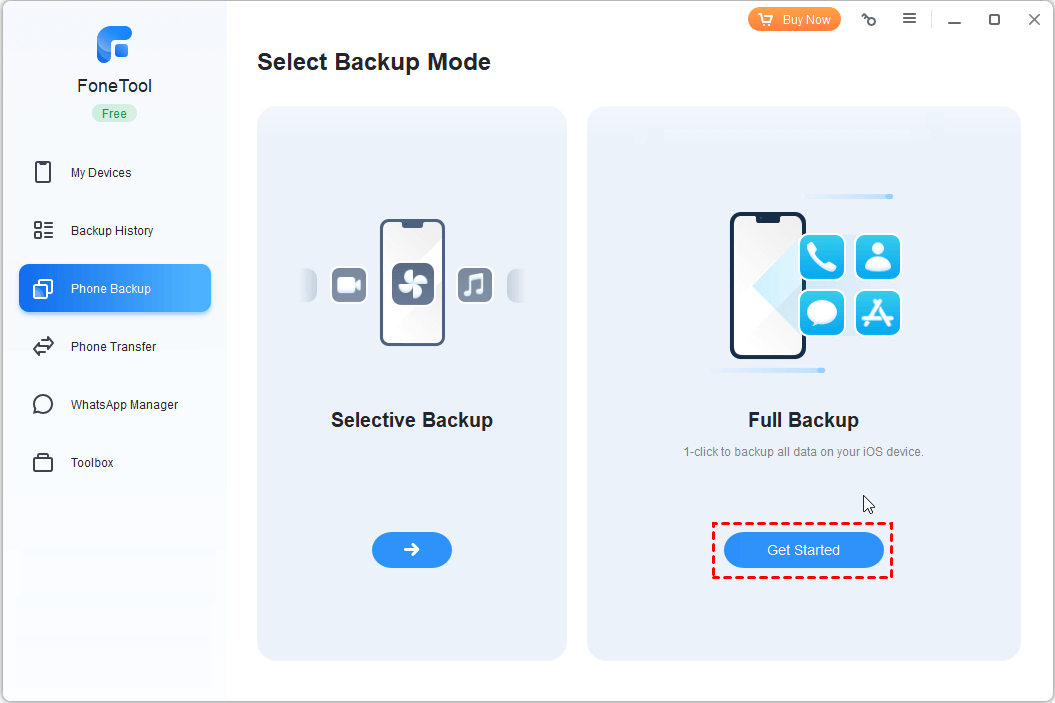 Step 2. Click Full Backup again to backup all data in your iPad. You can enable Backup encryption to protect your private data like Keychain. 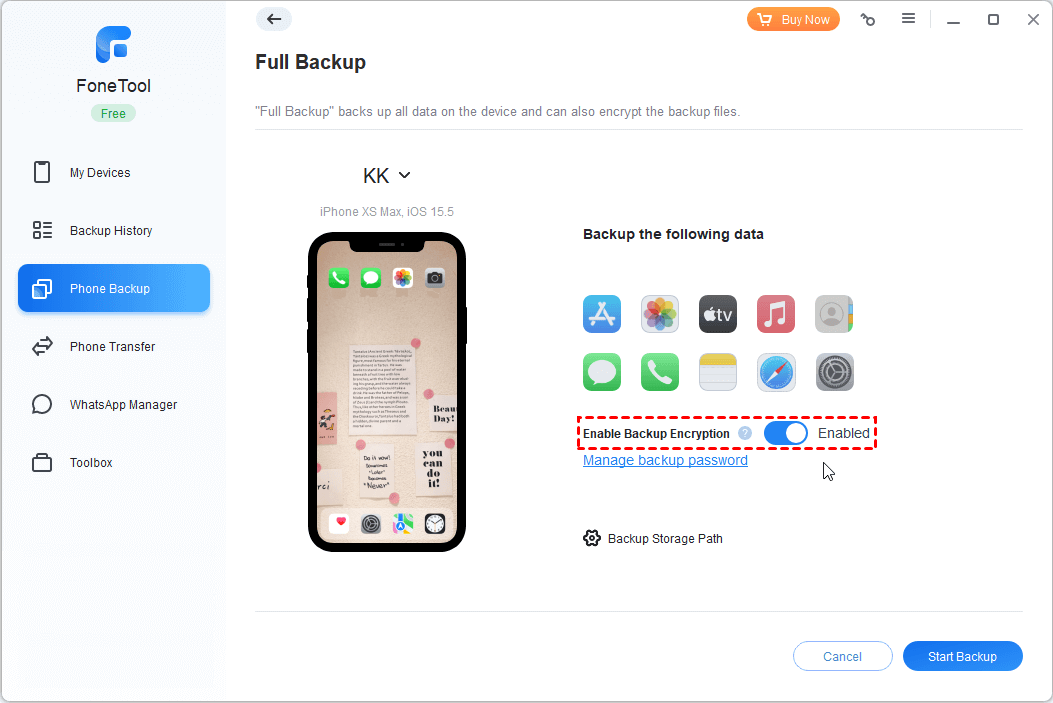 Step 3. Choose a backup path as you like, then you can click Start Backup to begin the task. 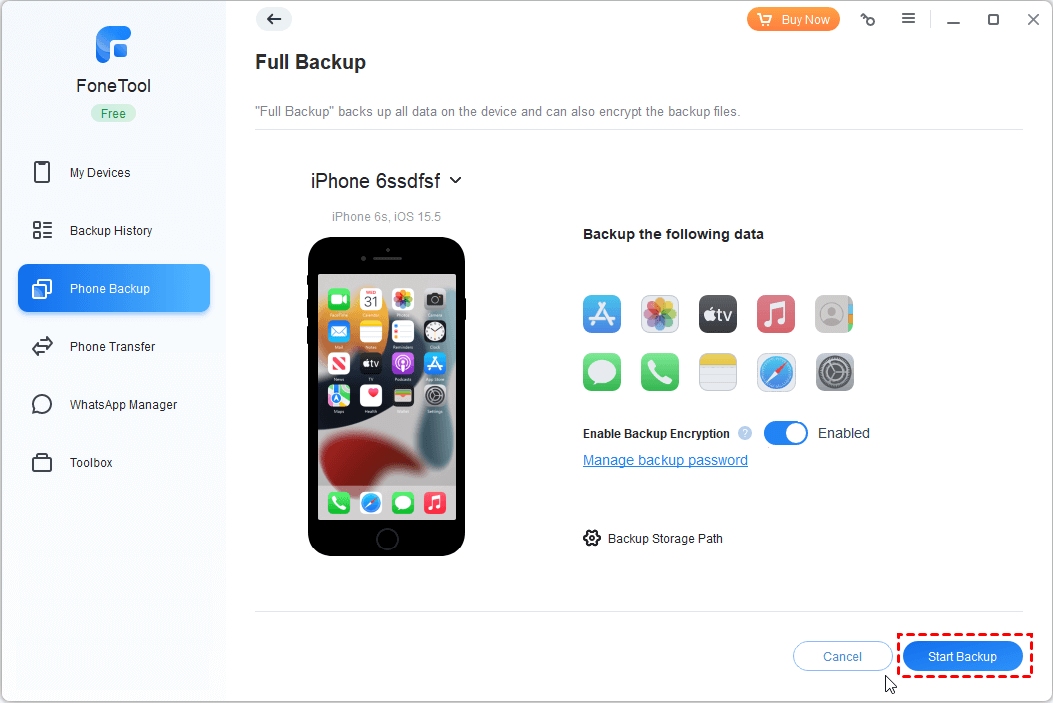 To restore the full backup, just click Full Backup from the Tools bar and choose the Full Restore function. If necessary, the powerful transfer functions in AOMEI MBackupper can also help you transfer data from iPad to iPad as you like.