What is NAS (Network Attached Storage) and How Does it Work?

What is NAS? How does it work? If you are not sure whether to buy a NAS device and want more information about it, this post may give you the answer.

NAS is short for Network Attached Storage, which refers to to an external storage device that attaches to network. NAS devices allow multiple users and computers to store data in a central place, and therefore makes it easy for files sharing between a variety of connected clients.

Compared with file servers, NAS drives provide faster data access, easier administration and a more straightforward configuration. Essentially, they are hard drives connected to the network that can add additional storage for your computers.

How much does NAS cost?

Common NAS manufacturers include Synology, Seagate, QNAP, Asustor, Promise, Western Digital, etc. They all provide NAS devices with different configurations, but the price are generally not cheap. A NAS that deals a lot of multimedia files could cost you over $500, not to mention those enterprise-level NAS drives.

Broadly speaking, NAS drive is not as affordable as cloud drive in the short term. But if you have long-term needs to store tons of files, get them from remote locations, or share with others, NAS could provide you larger storage space with more favorable price, because with it, you don't need to pay for the recurring monthly subscription as for cloud services.

NAS vs. DAS, what's the difference?

NAS and DAS (direct-attached storage ) can both increase the availability of data by using RAID or clustering, but NAS is designed as an file sharing solution over network, while DAS is an extension to an existing server and is not necessarily networked. When both serving over the network, NAS could perform better.

How does NAS work?

NAS drives are external storage devices that are independently connected to the local area network (known as LAN) and are assigned with their respective IP address. They provide users with centralized and consolidated disk storage through a standard Ethernet connection.

One of the most obvious advantage of NAS device is that you don't worry about the limitation of the storage capacity. Moreover, a number of NAS products support Redundant Array of Independent Disks (known as RAID) by holding plentiful disks, and you can connect these NAS appliances for storage expansion.

To make it clear, a NAS device has integrated these components:

Do you need a NAS at home?

When talking about network attached storage, you probably think of the office scenario at first. But what about using a NAS storage at home?

If you're just an ordinary user who occasionally uses computer for work or entertainment, an USB flash drive should be able to meet most of your storage needs, while NAS is simply too much. However, if you have a large family to share multimedia files with, or your requirements for storage space is extremely high, NAS would be a cost-effective option in the long run.

For example, if you are an amateur photographer who's used to documenting life in photos or videos, NAS system could help you securely store these files and efficiently share them with other family members, and the one-time cost could be lower than the recurring cost of cloud services.

How to pick a NAS device?

There are many NAS manufacturers in the industry today and it can be rather confounded to determine which product to buy. If you are currently thinking about it, may be you should take buying a NAS storage that supports RAID (Redundant Array of Independent Disks) into account, because:

To pick an appropriate NAS, you can also refer to reviews like this.

How to transfer data to or from network attached storage?

NAS is designed for convenient files storing and sharing, normally you can store files to it through File Explorer (previously known as Windows Explorer) just like other network devices.

Take Synology NAS as an example, you just need to open File Explorer > This PC > Map network drive > then enter required information to add the NAS storage as network drive. You can refer to a more detailed guide here.

If you prefer a more flexible way to transfer data from or to NAS, you can also use the specialized utility of corresponding NAS manufacturer, like Hybrid Backup Sync for QNAP NAS, Hyper Backup for Synology NAS.

But suppose you have multiple storage devices of different kinds, and would like to manage NAS data transferring with less restrictions, powerful third-party NAS backup software like AOMEI Backupper could definitely serve you better.

◆ It works on Windows 10/8/7/XP/Vista for free with high compatibility allowing you to transfer data from NAS to NAS, NAS to other locations, other locations to NAS. And the supported storages include internal/external hard drive, USB drive, cloud drive, network locations, etc.
◆ You can either create NAS backup image, or sync NAS files with original format for direct use. Want to execute the tasks automatically? It's also available to set up a schedule.
◆ If you upgrade to advanced editions like Professional, you can even sync changed files in real-time or perform two-way sync as you like.
◆ All in all, it integrates a lot of powerful features to make your NAS data management so easy. 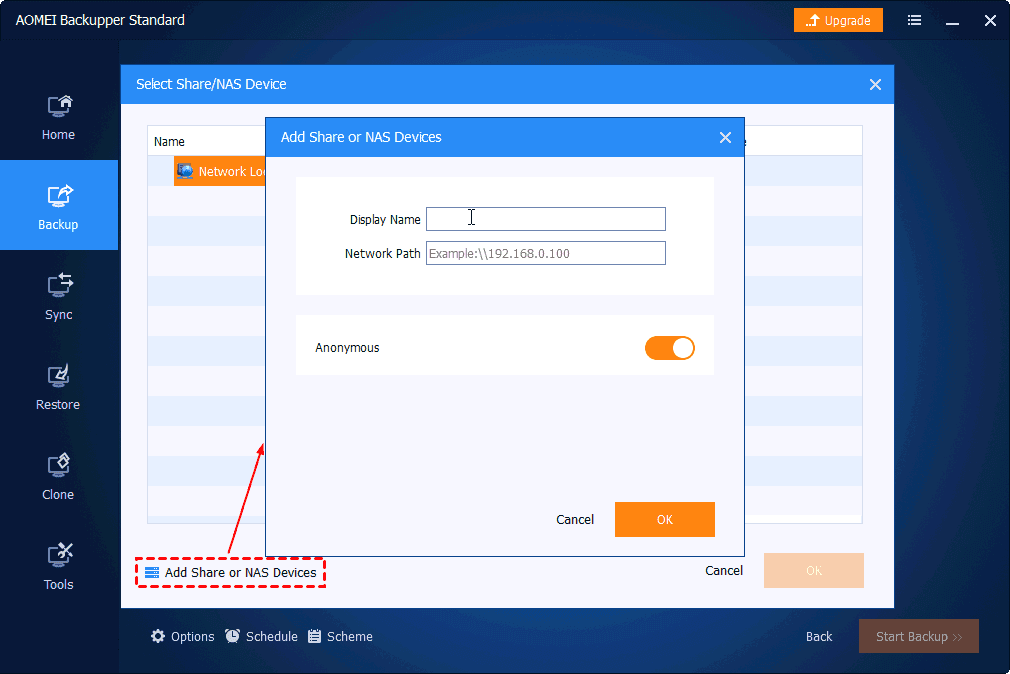 NAS is a convenient network attached storage device that can be used for file storing and sharing either in home or office. It may not cheap enough at first glance, but in the long term, a NAS device could be more cost-effective than cloud services that requires subscription each month.

To make fully use of NAS storage, you could consider using the manufacturer specialized utility, or turn to a third party tool applied to all brands of NAS. For the latter, AOMEI Backupper is an adequate choice with it high compatibility and complete features.

You May Also Like
Top 3 Ways to Backup Windows 10 to Network Drive/NAS
How to Create a NAS Mirror Backup Using File Sync?
Guide | Backup Windows 7 to NAS like Synology [3 Free Ways]
How to Automatic Backup to NAS in Windows 10/8/7?