Have you ever backup failed due to low disk space? The AOMEI Backupper can solve the problem so that you can backup successfully without effort.

Have you ever meet the problem that backup failed because of low disk space? A user told us that his backups have been failing recently due to very low disk space. He had a local drive E:, and he stored his backup files on this drive. But currently, the E: drive only has 208KB, and it popped an error message ”low disk space in local disk E: backup failed”.

How to solve this problem?

Those kind of problems are common issues: the disk that your backup is saved on doesn’t have enough free space, backup disk is almost full, low disk space for backup, backup failed due to lace of space, etc. As you set up a schedule automatically do backup daily or weekly, your backup disk will run out of space one day sooner or later because the size of disk space is limited. To overcome the low disk space, you may think about delete the old backups manually. But it is real pain to do that. Fortunately, the AOMEI Backupper makes it easy to delete old backup image files automatically.

AOMEI Backupper, a powerful backup software that not only can create backup images, but also manage the created backup images to avoid low disk space of backup location.

How to set deletion mechanisms?

AOMEI Backupper is a good backup software for Windows operating systems including Windows XP/Vista/7/8/8.1/10. You can set the deletion mechanisms to free up disk space for new backups based on the mechanisms:

● Delete full backup and its chained incremental/differential backups than a specified number of days, weeks, months, or years after the next backup finises.

● Retain a maximum number of full backup and its chained incremental/differential backups, deleting excess backups just after the next backup finishes.

The Scheme built in AOMEI Backupper (Professional, Server, and Technician editions) is also called AOMEI backup disk manager. You can use it to free up disk space for you new backups. 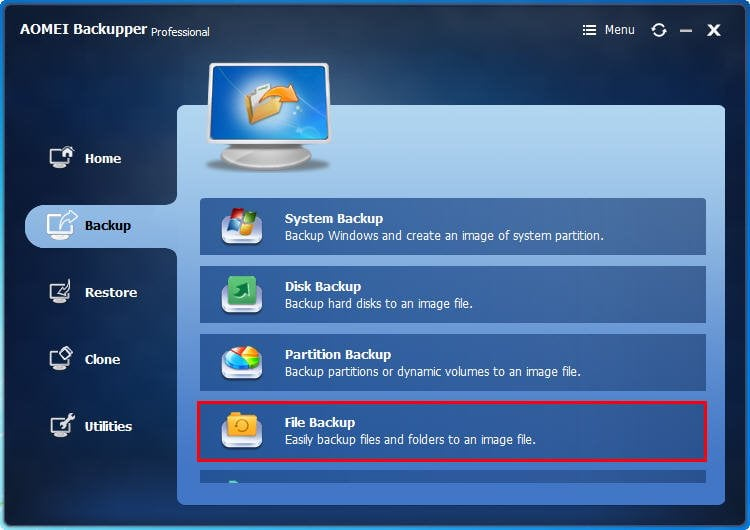 Step2. Select the files that you want to backup and select a destination place to store them in “Step1” and “Step2”. 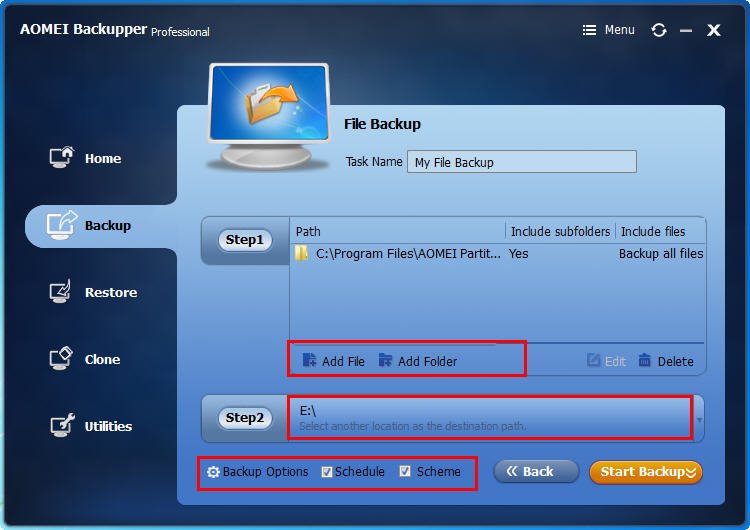 Step3. You will see there are three options at the bottom of this page. Backup Options, where you can set more for your backups such as add comments, compression, splitting, etc. Schedule, where you can set an automatically schedule backup for daily, weekly, monthly, and you can do incremental backup and differential backup here. Scheme, the AOMEI backup disk space manager, is for you to set deletion mechanisms. Click it to open the window as the screen shot like following. Tick the box in front of “Enable Disk Space Management”. Then, you can set the program as you want. 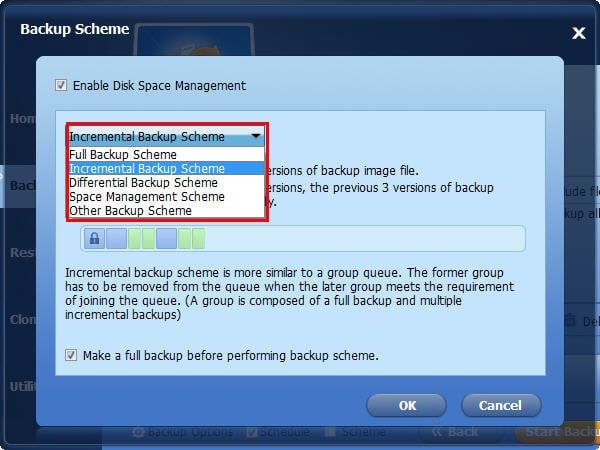 Here you need select what kind of Scheme according to your requirements. Full Backup Scheme, Incremental Backup Scheme, Differential Backup Scheme, Space Management Scheme, or Other Backup Scheme. After settings, click OK to back to the page and click Start Backup to launch the progress. Thus, you can avoid the problem that backing up failed because of low disk space.